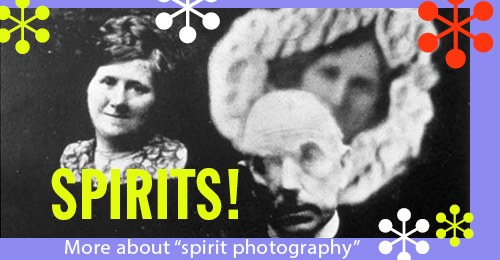 SPIRIT PHOTOGRAPHY: A BRIEF HISTORY THROUGH THE PARANORMAL BELIEVER’S LENS

EVER SINCE THE CAMERA WAS INVENTED, IT HAS BEEN USED TO CAPTURE REALITY — AND THE UNFATHOMABLE UNREAL

Daniel Wojcik, a professor at the University of Oregon in Eugene, is a specialist in folklore, mythology, and religious culture. His research has also looked at unusual social-cultural customs, events, and practices, and at the work of certain outsider artists. He is now assembling a new book, Artist as Astronaut: The Otherworldly Art of Ionel Talpazan, which will be published in the near future in the United Kingdom by Strange Attractor and distributed in the U.S.A. by MIT Press. It will recall the life of a Romanian-born outsider artist who made paintings and sculptures depicting unidentified flying objects and died in 2015.

His article on Spiritualism appears here, in this same issue of brutjournal.

Below, he looks at the history of so-called spirit photos, some vintage examples of which, from the vernacular-photography collection of John Foster and his late wife, Teenuh, can be found in this other article in this current issue of brutjournal. Click here to see it.