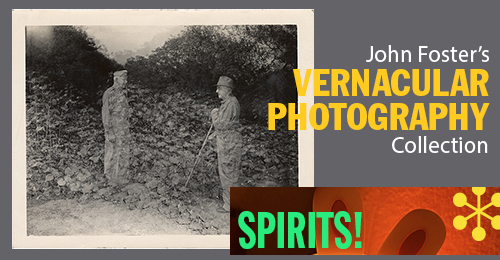 ANONYMOUSLY MADE IMAGES MAGICALLY SUMMONED THE DECEASED FROM THE AFTERLIFE

Over the years, the graphic designer John Foster and his late wife, Teenuh Foster, of St. Louis, Missouri, assembled notable collections of outsider art, folk art, and vernacular photography. Through a lively and always illuminating Instagram account (@accidentalmystery), John routinely shares photos and descriptions of favorite pieces from his holdings, as well as wide-ranging observations about art, connoisseurship, and aesthetics.

Now, with this issue’s examination of art related to spirits and to the spiritual in mind, John shares with brutjournal some rarities from his trove of vernacular photography (a term referring to found photos whose creators are unknown) representing a historical category known as “spirit photos.”

Way back in the fourth century, in ancient Greece, Aristotle described an image-making tool, the camera obscura, which, more recently, has fascinated such modern artists as David Hockney. The earliest successful image historians regard as a photograph was made in 1826 by the French inventor Joseph Nicéphore Niépce.