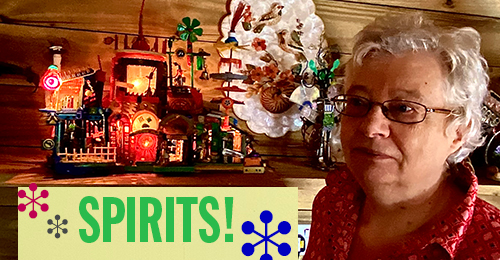 THE WILD BIRD WOMAN, HER WILD BIRDHOUSE, AND THE FROG SWAMP

In London, brutjournal’s artist-correspondent Cathy Ward recently caught up with the artist Judith McNicol, who, like Cathy, has long been interested in the work and ideas of the late Swedish-born painter and feminist activist Monica Sjöö (1938-2005). Ward’s separate article about a rare exhibition of Sjöö’s paintings that is now on view at Beaconsfield, in London, also appears in this issue; click here to see it.

Now, here is Ward’s report about her visit to McNicol’s home and studio near London, where she reacquainted herself with the history of her friend’s art-making career and the thinking and personal experiences that have influenced it.

"Judith McNicol leads us to a country of wild dreams, where each form seems to give birth to another fantastic cycle of creation, a tumult of the creative process.  Wherever the eye comes to rest, an adventure is played out before us, its apparent anonymity represented by a multitude of prolific symbols.

This strong, original work is clearly rooted in unknown territory, whose features the artist seeks to reveal to us. Her work is concerned not only with exploring but [also with] conquering this territory. It is this struggle that Judith McNicol wishes to share with us.”