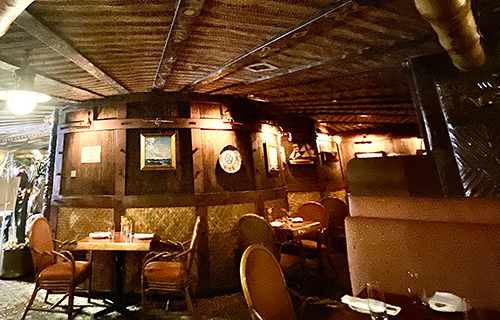 WE’LL DRINK TO THAT: THE CAMPAIGN TO SAVE TRADER VIC’S LONDON, WHICH MUST CLOSE SOON

A 60-YEAR-OLD, POP-CULTURAL AND INTERIOR-DESIGN ICON IS BEING FORCED TO CLOSE — BY DECEMBER 31, 2022

LONDON — The fizz just went out of our champagne, and the bright-red maraschino cherries decorating our Mai Tai cocktails just sank to the bottoms of our tiki mugs.

That’s because news has come that Trader Vic’s at the London Hilton on Park Lane has been notified by its landlord that it must soon close, with December 31, 2022 scheduled as its last day of business. If, indeed, the shuttering of this venerable watering hole does come to pass, this outlet of the American restaurant chain that began in Oakland, California, in 1934, and is famous for its Polynesian décor, will just miss celebrating its 60th anniversary.

Since it opened in 1963, London’s Trader Vic’s has served up its relaxing, exotic, quirky charm to a diverse and enthusiastic clientele. Needless to say, design aficionados, urban-history buffs, London night owls, and fans of colorful cocktails — the Babalu, the Gun Club Punch, the Doctor Funk of Tahiti, the Trader Vic’s Sling —feel strongly that this outlet of Vic’s should not be forced to close, and that it should somehow be preserved.

Perhaps it’s because of the feeling that can strike visitors when they descend the steps leading into this London hideaway, passing through time and finding themselves back in a moment when the world was still recovering from a massive war, and the groovy love-vibe that would mark the “Swinging Sixties” was still brewing.

Members of Save Trader Vic’s London (Instagram: @savetradervicsldn), a new group that has sprung up to lead the charge to prevent the bar-restaurant’s closing, have pointed out that the establishment is one of cultural and historical significance. In addition to wanting it to stay in business, they have called for key elements of its interior décor, which includes authentic Polynesian tiki carvings and noteworthy examples of tapa cloth (a fabric made in the islands of the Pacific Ocean from the bark of the paper mulberry tree) to be preserved.

Annika Nickson, a historian and travel consultant who helped write a declaration issued by Save Trader Vic’s London, called attention to the “cultural and international significance” of what she described as the restaurant’s “astounding collection of original Polynesian tiki carvings and tapa cloth, which form part of [its] structure.” Nickson also noted that Trader Vic’s London occupies a “historic place on the world stage as part of a global cultural phenomenon” and that, in Britain, it is “the only survivor from this period outside the U.S.A.”

That is to say that London’s Trader Vic’s outlet represents a commercial and pop-cultural development of the late-20th-century, and especially of the post-WWII boom years, when certain American brands were beginning to expand into Europe in the first expressions of what would become today’s now-familiar practice of global branding. As Nickson also pointed out, Trader Vic’s London branch was “an integral part of the design and American hospitality ethos [of] the first-ever international Hilton” hotel, which its parent company chose to open in the British capital.

In 1934, Victor J. Bergeron, Jr. (1902-1984) opened a small bar-restaurant called “Hinky Dink’s” across from his parents’ grocery store in Oakland, California. With the tropical character of its menu and décor, Bergeron’s eatery became popular and eventually turned into a franchise operation; it also changed its name to “Trader Vic’s” in honor of its founder. Its burgeoning success led to a partnership arrangement with Conrad Hilton’s eponymous Hilton hotel chain.

Bergeron and Hilton were two entrepreneurial pioneers who created not just a business partnership but also a close friendship. In the early years of the design development of the interior décor for the Trader Vic’s chain, emphasis was placed on featuring authentic items from the South Pacific islands the restaurants were meant to represent rather than using replicas. Bergeron forged lasting relationships with the artists with whom he worked to create his distinctive interiors, commissioning them to create pieces that would be displayed in his restaurants around the world. Bergeron, who was known as quite a character, claimed that he lost a leg to a shark. In fact, as a child he had undergone a medical amputation.

Trader Vic’s was an integral part of the architectural design for the London Hilton on Park Lane when construction on the project started in March 1960. Thus, today, with its displays of art and objects from the South Pacific and its originally commissioned artworks, none of which have been touched for many decades, Trader Vic’s London exists in a kind of natural state of preservation.

It’s a large, walk-in time capsule from a mid-20th-century moment that has been entombed in the basement of a fine hotel. Its legions of tiki artifacts represent deities whose protective powers and goodwill are believed to be able to ward off evil spirits (and maybe even help with a nasty hangover).

Ahlo Leon, a Tahitian carver, made all of the tiki poles and large Marquesan statues — inspired by the traditional art of the Marquesas Islands — that became features of the interiors of Trader Vic’s outposts in such cities as Atlanta, Tokyo, Munich, and London. Barney West (1919-1981), a native of Seattle whose family moved to the Bay Area of northern California when he was young boy, was an American artist who, during World War II, joined the merchant marine and served on ships in the South Pacific. West, who also made original sculptural decorations for Trader Vic’s, learned carving techniques from Polynesian artisans.

In the London restaurant, approximately 30 hand-carved Marquesan tiki poles support a number of “bamboo” roofs (in fact, they are made of painted plaster of Paris) topping various “huts,” or seating areas within the larger space. In-between the carved support poles one finds painted-wood timbers, all of which, today, are still decorated with their originally applied motifs. To find such a concentration of original Polynesian artworks in one place like this is unusual; normally, outside its homeland, such a collection would tend to turn up in a museum setting.

Pleas for Trader Vic’s London to be saved are being sounded loudly by the venue’s admirers.

Deborah Sugg Ryan, a former curator at the V & A Museum in London who is currently a professor of design history and theory at the University of Portsmouth in southern England, told the Save Trader Vic’s London group, “The nearly 60-year-old [establishment] is not only the longest, continuously running restaurant in [its] world-wide chain but also London’s oldest example of the Polynesian Pop phenomenon of the tiki bar and restaurant.”

Similarly, Greg Votolato, an architect, curator, and writer who focuses on design technology and culture, told the organization, “The London Hilton on Park Lane is sitting on a cultural treasure that, with a bit of creative marketing, could be once again a long-lasting financial asset.”

The walls of Trader Vic’s London are covered in tapa cloth, a laboriously hand-crafted fabric that was once used for monetary purposes and for clothing. It is made from the inner bark of the paper mulberry tree, while the pigments of the dyes that are used to paint on it are made from bark or mangrove roots mixed with natural oils, resins, and sea water.

The tapa cloth that is visible at Trader Vic’s London came mainly from Tonga; each piece that forms part of the restaurant’s décor is unique, and it is likely that all of this fabric came from the Mataitonga family of Nuku’alofa, the capital of Tonga on the northern shore of Tongatapu Island, in the southwestern Pacific Ocean.

Sven A. Kirsten, a German-born cinematographer, is the author of The Book of Tiki: A Guide for the Urban Archeologist (Taschen, 2000). In a recent e-mail exchange, he observed, “I would say that the London Trader Vic’s, in its marriage of modern-American and traditional Tahitian sculpture, perfectly reflects tiki as a world style, well suited for a center of world trade such as London.”

As a once “great” Britain counts the many ways in which its Brexit misadventure has failed, and its aimless government struggles to fashion actionable policies for its imaginary “Global Britain” concept, Kirsten’s argument is one that creatively brings architectural preservation together with economic reality.

We’ll drink to that.

Make ours a Queen’s Park Swizzle — and when it comes to the shot of rum, make it a double.