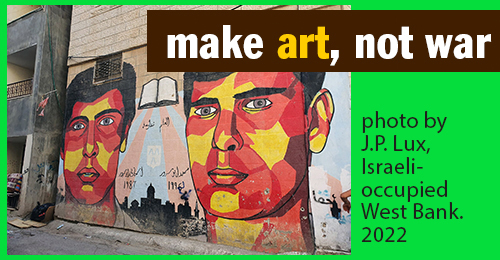 THE WRITING’S ON THE WALL

A BRITISH ARTIST VISITS THE AIDA REFUGEE CAMP IN THE ISRAELI-CONTROLLED WEST BANK, THE MOST TEAR-GAS-EXPOSED PLACE ON EARTH

J.P. Lux is an artist based in England who has visited the Israeli-controlled West Bank many times and is writing a book about the British street artist Banksy’s long-standing involvement with that occupied Palestinian territory.

Here, Lux offers a report that provides a historical context for viewing and understanding the photos of the public murals he saw during his most recent trip to the West Bank, a selection of which are reproduced below.

Since the First Intifada, the Palestinian uprising against Israel’s control of the West Bank and the Gaza Strip, which began in December 1987 and lasted until the Madrid Conference, which took place in late 1991, on the walls inside the Aida refugee camp, as in other camps like it across the Israeli-occupied Palestinian territories, graffiti has become a visible tool of resistance.

Stylistically, the graffiti and artworks that cover the walls within the Aida camp and on the Palestinian side of the Israeli-built “security wall” that separates Israel from the West Bank are multifaceted and varied. Their imagery includes everything from hastily spray-painted messages to well-executed works of art that refer to the ongoing Israeli-Palestinian conflict or to the wall itself.