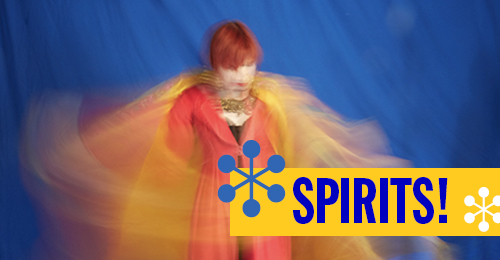 The New York-based photographer Bill Westmoreland, who serves as brutjournal’s visual director, is known for his portraits of jazz musicians and singers, Broadway performers, and other creative types; he has also produced several portfolios of fine-art images examining such themes as vernacular architecture (barns and old, rural houses) and the landscape as seen from a moving vehicle (his “Drive-by” series).

Now, inspired by the charmingly spooky “spirit photos” that were made in the late 19th century and early 20th century, when photography was still in its early phases of development, Bill has used a modern digital camera and old-fashioned techniques — asking his subjects to move while he shoots their portraits, or moving his camera while shooting to create intentionally blurry, out-of-focus images — to produce some all-new “spirit” images with a contemporary vibe.

Elsewhere in this issue, the Missouri-based graphic designer John Foster, a longtime collector of so-called vernacular photography — photos in certain genre categories whose makers are now unknown — shares with us a group of vintage “spirit photos” from many decades ago. Some of the intriguing photographic images that have earned this designation were purposefully produced using primitive double-exposure techniques or resulted from film-processing or photo-printing accidents in the darkroom.

Whether created intentionally or not, these photos of ghostly-looking human or animal subjects, or of strange activity in the sky or in the landscape, or of other, dream-like, anything-but-normal apparitions or events, were regarded by some earnest believers in the past as proof that phantoms really did exist, or that a table-rattling séance in the dark really could rustle up the spirit of someone’s deceased grandmother or best friend.

Today, of course, powerful digital software allows photographers to go much farther in their manipulation of the images they create than long-ago conjurers of “spirit photos” ever could have imagined. With a program like Adobe Photoshop, with just a few keystrokes, an image reviser can change whole backgrounds, the colors of a subject’s clothes, or even a photo-portrait sitter’s face and head.

Inspired by the quirky mystery of vintage “spirit photos,” we asked Bill to create some new, contemporary images of this kind that would reflect and channel the, well, spirit of those old pictures, which may strike many a viewer today as goofy curiosities.

Responding to our invitation and taking up the creative challenge, Bill photographed the singer and actress Wendy Lane Bailey in various stages of ectoplasmic explosion, out-of-body jubilation, and psychic migration.

Bailey, a serious, multitalented performing artist who is now working on a solo theater piece, “She Has Wings”, which will be presented for the first time later this year, in the autumn, at the United Solo Theater Festival in New York, had to put away her scripts and sheet music, and give herself over completely to the soul-stirring current that flowed through Bill’s studio as their photo session progressed. (Rumor has it that the ghost of the 19th-century French actress Sarah Bernhardt wafted through the room and caused Bill’s camera to flash wildly for a fraction of a second.)

“When I look at most photos, I see moments or actions frozen in time,” Bill observed, adding that, by contrast, a blurred image tends to imply movement. As a photographer who has routinely embraced the blur as an aesthetic tool, Bill noted, “My blurry photos are usually intentional. Accidental blurriness rarely occurs due to my camera settings. Blurry photos give their subjects a transparent quality, which can suggest a spiritual, otherworldly atmosphere or point of view.”

We can only imagine what Bill would capture if, traveling back through time with his powerful modern camera, he were to attend a séance led by a self-styled, well-connected — to the afterlife or the spirit world, that is — medium in Paris, London, or New York. Now those are some pictures we would really like to see — in crisp, sharp focus, of course.