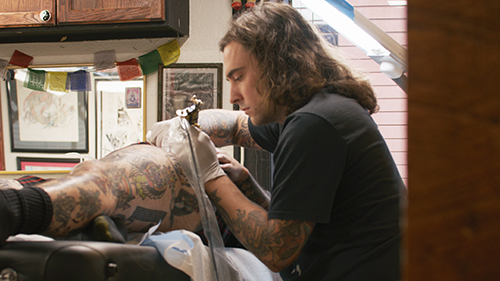 The tattooer Emil Orth at work in Denver, Colorado. Photo courtesy of the artist
EMIL ORTH: IN DENVER, BECOMING A TATTOO ARTIST

A WALKING ART GALLERY, A YOUNG AFICIONADO IS LIVING HIS DREAM

In recent years, Emil Orth, who lives in Denver, Colorado, has been apprenticing and learning the techniques of professional tattooers. It was his interest in collecting art and, in particular, his growing interest in outsider art that steered him toward a path leading to an in-depth study of tattooing and tattoo art, and ultimately to an opportunity to formally train to become a tattooer himself.

Aesthetically speaking, Orth is also interested in what he calls “crossover” aspects of outsider art and tattoo art; his remarks on this topic call attention to a certain shared sensibility between outsiders, tattoo artists, and serious tattoo aficionados. He shared the following observations about his involvement with tattooing with brutjournal.

I’ve been interested in tattoos since I was 12 years old. I remember once finding a shirt at a flea market in Arkansas; it had an image of a Viking skull with one eyeball, and it said “Tattoo City” or maybe “Tattoo Magazine.” I wore that shirt to shreds . I remember seeing tattoos on bikers, musicians, and, in movies, on members of secret societies. Even though, as I was growing up, tattoos were becoming more mainstream, in my suburban world, they still represented the unorthodox, and the way conservative society rejected them only made me want them even more.