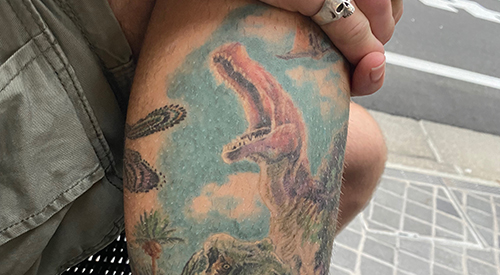 Detail of a “leg sleeve” featuring a dinosaur, created and applied to Dominic Skelton’s body by the Tokyo-based tattooer Miyuki. Photo by Edward M. Gómez
TATTOOED IN TOKYO, WHERE YOUNG, DARING DOMINIC SHOWS SOME SKIN

TOKYO — When you’re a tall, 32-year-old, white guy with blonde hair and large, colorful tattoos on your arms and legs, walking through a Japanese city in shorts and a short-sleeved shirt on a hot summer day, you’re kind of hard to miss. Dominic Skelton, who comes from South Africa and has lived in Tokyo for the past six years, knows what it feels like to attract some inquisitive looks.

Skelton is a teacher at a juku, a kind of private school that helps students reinforce their learning in certain subject areas and prepare for the competitive tests Japanese youngsters must take — and pass — at various stages of the educational system. The school at which Skelton works serves students from the kindergarten level through the high school, offering instruction in English to both Japanese and foreign children.

Recently, Skelton told me about his experiences as a foreigner who is quite visibly tattoed and living in Japan, a country whose tattoo-art tradition is long and rich, but in which tattoos are generally frowned upon. Often, people with visible tattoos are not allowed to enter a sento (public bathhouse), an onsen (hot-spring resort), a swimming pool, or a beach area unless they cover their tats with adhesive bandages, a procedure that is awkward or nearly impossible for those with large markings. In modern Japan, tattoos are often associated with yakuza — organized-crime gangs and their participants, for whom tattoos are symbols of membership in their rather exclusive club.

Over coffee on the terrace of a café in a Tokyo neighborhood that is a magnet for young hipsters, the kind who are most likely to sport tattoos themselves, Skelton said, “My fascination with tattoos really came about once I entered the music scene in Pretoria, South Africa, when I joined a band. I play the bagpipes and I joined a heavy-metal bagpipe band. At that time, we were very young. The drummer was into tattoos and had tattoos, and my friend Liam, one of the members of the band, became a tattoo artist.”

Given that the music scene with which Skelton was involved was characterized by what he called “a huge tattoo culture,” it was natural, he said, for him to begin tattooing his own body. “The first tattoo I got was this one with the thistles design from my bagpipe,” he explained, showing me a large image on the upper arm on his right side. “Liam got the silver engraving from his bagpipes applied on his body, too. He tattooed everything on my left leg.”

I wondered about how Skelton’s family members reacted to his first tattoos. He recalled, “No one else in my family has tattoos, but my mum made the mistake of saying that my first tattoo was beautiful!” He mentioned that his maternal grandmother was from Scotland and that, from his mother’s side of his family, he acquired a passion “for all things Celtic.” The tattoo of the design from an engraving on his bagpipe was his first tattoo, but he went on to have a Celtic tree of life and some animal designs applied to his body, too. From those starting points, he further developed a collection of several large tattoo “sleeves,” as they are called, that now cover parts of his arms and legs. In tattoo-related jargon, a “sleeve” refers to a design that wraps around all the sides of part of an arm or leg.

Skelton remembered when he thought about extending the tattoo sleeve on his right arm down toward and onto his forearm. He said, “All of my friends thought it was super-cool, but my family did not want me to extend my half-sleeve to a full sleeve. I went to the tattoo artist and actually had the stencil on my arm when my dad called, spoke with the artist, and pleaded with us not to go ahead. So I decided that it really was not a good idea at that time.”

That probably turned out to be a worthwhile, practical move, for now, years later in Japan, it means that he can roll up his sleeves and bare his forearms. Skelton observed, “In South Africa and in the Western world, if you have full-sleeve tattoos, it doesn’t matter, but for me, as a teacher in Japan, it’s nice to be able to wear a long-sleeved shirt, roll up the sleeves, and look presentable at work. So in retrospect, I’m glad that my parents talked me out of doing a full sleeve on my arm. I’ve never wanted to get tattoos on my face or on my neck. The fact is, anybody who has a tattoo on his face is going to be judged, and I don’t think it’s worth it.”

Skelton said that, when he first came to Japan and wore shorts or short-sleeved shirts revealing his tattoos, he was aware that he attracted stares from some observers, but he added, “I noticed people looking but I’ve never had any regrets about my tattoos. I feel pretty confident. I did notice some people looking, especially older people, but I’ve never had any rude comments. I did get stopped once by the police, who inquired about my tattoos, but not in a judgmental way. It turned out to be a routine [identity] check.” Still, the presence of visible tattoos on his body might have “been a factor,” Skelton noted, that prompted the police to stop him.

He noted that, in the Tokyo neighborhood in which he lives, he is allowed to enter the public bathhouse. However, he observed, “I think it would be a hugely different scenario for a young Japanese person who was heavily tattooed, who would probably feel discriminated against. I think I get something of a free pass, because I’m a foreigner, but for a young Japanese person with tattoos, people might assume, ‘Ah, that kid’s gone off the rails.’”

Interestingly, Skelton added that he believes that being visibly tattooed might be harder for women in Japanese society than for men, since, as he noted, some tattooed women might be regarded as “having emotional problems.” For young men, though, he said, “It’s becoming something of a trend, and among young Japanese barbers who run American-style barbershops, tattoos have become part of their culture. I’m starting to feel like it’s normal — seeing a young Japanese guy working at a hip, trendy place with tattooed arms.”

Could the motivation of such young men to tattoo parts of their bodies be the same as his own? Skelton told me, “For me, it came out of music — out of rock’n’roll, which has always been the voice of rebellion. Being a tattooed person puts you in a different group. It’s a direct, visual way of saying, ‘I’m not like everyone else.’ There’s the instant affiliation with a certain group, with a community; there’s the self-expression and the building of an identity when you have an idea and permanently put it on your body.”

By contrast he noted, “Deciding to remove a tattoo — I think that must be psychologically traumatic as well as being very painful. You made a decision to put something permanently on your body, something that meant something to you, and then you decide, ‘That doesn’t mean that much to me anymore.’ That’s why I would avoid getting your first girlfriend’s name tattooed across you heart.”

Skelton has gone to tattooers in Tokyo for some of his most colorful wabori (Japanese-style) tats, including a dinosaur on one calf and an elaborate left-arm sleeve. One of his favorite tattoo artists in the Japanese capital is U-jiro, whose studio, Shimokita Ink, is located in the Shimokitazawa neighborhood. Skelton said, “U-jiro is a well-known artist who plays in a zombie-themed, psychobilly band.” He also frequents the studio of Miyuki, a female tattooer who created a dinosaur on one of his legs. Skelton said that he has become U-jiro’s and Miyuki’s faithful customer. He noted, “There’s the whole process of meeting and becoming friendly with a tattoo artist whom you like. That’s a big part of the tattooing experience. I couldn’t imagine getting a tattoo from someone I didn’t like.”

After discussing how tattoos — and their owners — inevitably age, I asked Skelton if he ever thinks about what his own body will look like someday when he is older and perhaps covered with even more designs than he currently wears in his personal tattoo collection.

He replied, “I’m definitely going to get more, wherever I have space. If I were to get my buttocks or back done, the only reason I can think of for doing the buttocks would be if I were to do a whole, Japanese-style back piece, which I have considered. It’s a big undertaking. I’ve still got quite a lot of space on my leg. I’ve got Viking and rune-style tattoos on my chest — some protection symbols that Viking warriors used to paint on their foreheads.” He shows a compass motif that the Vikings used to paint on their ships to make sure they would not lose their way.

For now, Skelton cuts a distinctive figure in a Japanese setting, and since he regards his tattoos as a very personal kind of art collection, he intends to provide them with a good, healthy showcase — his own body. He said, “Having tattoos makes me want to stay in shape. Having tattoos, you want to show them off. Getting old, like, when I’m 80 — I’ll still just rock it. When I’m a cool 80-year-old, they’ll still look amazing.”