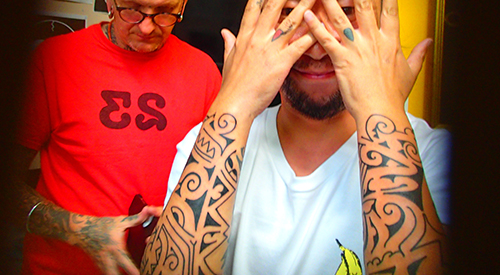 A customer (right) displays his tattoos designed by Misterwim, which were applied by the tattooer Alex Binnie (left) of Into You Ta2, London. Photo by and courtesy of Misterwim
THE WIT AND WISDOM OF MISTERWIM

A BELGIAN-BORN TATTOO ARTIST BASED IN LONDON HAS NO REGRETS

The Belgian-born, London-based visual artist, tattoo aficionado, and self-styled “conceptualist tattoo artist” Misterwim is also known as “Spaghettiman” and in at least one recent e-mail message referred to himself as “Wimmi.” His identity appears to be as fluid as his art’s dynamic line. Over the years, he has created numerous tattoo designs as an extension of what he calls his body-painting work. Misterwim, who was born in Antwerp in 1961, was, he recalls, educated by Jesuits before going on to study art history, serve in the army, and then became an artist.

His personal website lists his offerings — or assets? — as including “orna-mental New Age entertainment,” a “4-wheel drive drawing system,” and “graphical massage for eye & body.” He seems to have collected every book, poster, sticker, exhibition announcement, or banner he has ever seen that has had anything to do with tattooing and tattoo art, and his own artwork, which often involves decorating the surfaces of big, spherical sculptures or balloons, caravans (“trailers” to Americans), mural-size plastic sheeting, or old photos, is characterized by a free-flowing, sensuous line that resembles and might even have been inspired by that of — you guessed it — ornate tattoos.

As Misterwim puts it in writing in his inimitable way, “I was studying ‘art’ ‘history’ in the early 1980s, when street art started booming. Pick up a compulsive manic drawing habit at the same time. Sycosomatik. Far more energizing, fascinating than sterile knowledge about the remaining number of Doric or Ionic columns of a Greek temple in, let’s say, Sicily. Don’t get me wrong. Nothing compares to the Van Eycks’ Het Lam Gods and the missing altarpiece. [He is referring to what is known in English as the Ghent Altarpiece, which was produced in the 15th century and is housed in St. Bavo’s Cathedral, in Ghent, Belgium; it is attributed to the painters Hubert and Jan van Eyck, who were brothers.] Never mind ‘outsider art,’ ‘primitivism,’ ‘kid stuff,’ folk art,’ ‘graffiti,’ etc. I got into decorating ostrich eggs and other 3-D objects.”

Somewhere in such a proclamation lies the articulation of a principled aesthetic worldview and starting point for thinking about and making art. What interests us is how it links up with and over the years has fueled Misterwim’s enthusiasm for tattoos, which now cover much of his body.

He told us, “I was about 30 when I got my first tattoo (my own design, ridiculously small), made by the Dutch loudmouth ‘Hanky Panky’ Henk Schiffmacher, in Amsterdam. Swapping tattoos for murals in tattoo studios. Belgium, Brazil, Germany, Switzerland, and the United Kingdom soon followed. It was the start of the golden age of international tattoo conventions — before they became an industry [propelled by] suppliers and magazines. I happily attended [them] as the only body painter in the lions’ den. Kids welcome! No bloodshed in my booth!”

About his heavily tattooed body, Misterwim remarked, “After all these years, I wake up every day, look at my arms and say, ‘Waw!’ No regrets. There’s so much left to be covered, [but that] doesn’t necessarily mean [that] you go for the body suit, but it’s tempting.” Whether or not to pursue such all-over tattooing of one’s body, the artist noted, depends on one’s “vision, appetite, patience, and budget.”

Like many people who have endured the pain of tattooing, Misterwim stated, “Gradually, you get used to the whole process and you learn how to trick it and even enjoy it! The pain. It still hurts and it can be excruciating at times. It also depends on the tattooist. I prefer the gentle ones, not the butchers.”

About his years-long experience as someone who has created tattoo designs and also gone under the needle many times, Misterwim recalled, “In the beginning, I was self-obsessed enough to want exclusively my own designs on my body. Then a world opened up, and my view became panoramic. One of my best friends, Munpie, was born to be a proper tattooist. We sort of started together, discovering this universe, and I relied on him to tattoo my designs on friends and punters, so I didn’t bother too much about picking up the machine [myself], although he gave me one. I should have known better; I’d be rich by now.” (Munpie’s studio is Black Island Tattoos, in Antwerp, Belgium.)

Insofar as Misterwim is still extending a limb or offering a patch of skin to be tattooed, he told us, “These days, I like to give carte blanche to the tattooist, sharing a mutual understanding about making something beautiful. I’ve always admired Japanese tattoos as something terribly, profoundly, beautiful, as something to die for. So finally I have a dragon — it’s still unfinished — on my back, which was made in Tokyo by Ichibay.”

After spending several decades as a tattoo enthusiast, Misterwim now observes that “there’s an inflation of graphic body illustrators these days, due to the rise of the cut-and-paste generation and the promise of rich pickings in this business.” Still, he added, “It takes more than that.”

In an e-mail message, he offered that last “humble opinion,” as he put it, as a “fun-da-mentalist.”

Website of the artist and tattoo designer Misterwim, who is also known as “Spaghettiman”:
www.misterwim.com