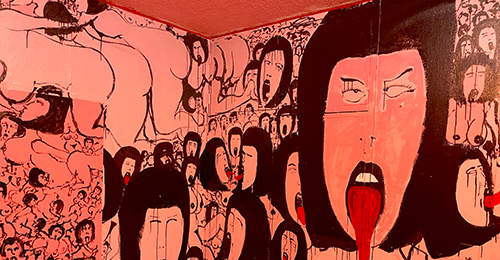 Earlier this year, the artist Botchy-Botchy painted all of the interior walls of a tiny, one-room apartment near Shibuya Station in western Tokyo. The apartment was located in an apartment building that was scheduled for demolition. Its landlord allowed the artist to execute his project and invite visitors to see it over a period of several weeks prior to closing down the building. Photo by Edward M. Gómez
TAKE US TO BOTCHY-BOTCHY’S PAINTED CHAMBER

Recently, on a cold Saturday afternoon in the mid-winter, the Scottish artist Jack McLean, who has lived in Tokyo for many years and makes line drawings and large paintings of fantasy characters filled with mordant humor, accompanied me on a visit to the temporary studio of his friend, a French-born artist who goes by the name “Botchy-Botchy.” The word “botchy” (ぼっち) literally means “alone” or “solitude.” In Japanese, it sounds a bit curious, intriguing, and amusing as an artist’s moniker.

I had met Botchy-Botchy very briefly at the opening of an art exhibition at a small gallery about a week prior to my visit with McLean to his studio in a tiny, one-room apartment in a building near Shibuya Station in west-central Tokyo, one of the busiest transportation hubs in the Japanese capital and the center of one of its most popular commercial-retail districts. The Shibuya area is packed with fashion boutiques, department stores, restaurants, entertainment venues — fancy a leisurely afternoon sipping tea at a cat café? — and hip nightspots. Like nearby Harajuku, it’s a mecca for youthful, far-out fashion. Street-fashion lovers, get your cameras ready!

Botchy-Bothcy is a thin young man from rural France, with a prominent mohawk, who arrived in Japan in 2004 after having lived in Paris, England, Chicago, and Amsterdam. His background is in banking and finance, a professional sector in which he worked for a long time before leaving it in 2018 to devote his time and energy to making art. He told us that he already was a skilled saxophone player, and that, for several years, he had enjoyed playing in bands. “When I left my job in the corporate world to dedicate myself to art, it felt liberating,” the artist said.

Among his artistic projects, Botchy-Botchy has designed a wine label, created digital animation for a Japanese girl band’s music video, and illustrated a picture book based on a song by the Blue Hearts, a Japanese punk band.

When I first met him at that little gallery’s exhibition opening, McLean was there, too; at that time, Botchy-Botchy very briefly told us that, in recent weeks, he had installed himself in a one-room apartment near Shibuya Station, where he had painted all of the interior walls to create one big, all-over, temporary mural — temporary, because the building had been marked for imminent demolition. Its owner planned to tear it down and sell the extremely valuable plot of land on which it stood to another developer.

When we visited Botchy-Botchy at this site, he further explained that it was through a friend of his that he had heard about the soon-to-be-razed building and landed an opportunity to use one of its empty apartment units as a studio for a short-term project. When he proposed painting its interior walls and inviting guests to stop by and see it before it was destroyed, the landlord agreed to the arrangement, just as long as the artist did not throw any wild parties. In any case, the water and gas services in the minuscule unit had been turned off. Only electricity was still available so that the artist would not have to struggle, working in the dark.

Although McLean, like Botchy-Botchy, seems to be well connected to a vast network of artists, musicians, fashionistas, and other creative types in Tokyo’s always bubbling underground and alternative cultural scenes, both he and I were unprepared for the intensity and impact of the art-filled environment the French artist had conjured up in the main room of the little apartment. It measured roughly seven by nine feet, or roughly two by three meters, and included a very small entrance space (the “genkan,” in Japanese) with a kitchenette on one side and a bathroom on the other. This area, too, had been transformed to become part of Botchy-Botchy’s total-immersion art experience.

“It’s an orgy scene, and, this way, with all of the walls painted floor to ceiling, it feels like you’re walking right into the action,” the artist explained as McLean and I stepped into his glowing pink chamber. To create more wall surface to paint, he had covered the sliding glass doors of a balcony looking out onto the street with plywood panels. In his all-over mural, women’s heads and the occasional pair of buttocks bob up and down in a sea of bodies pressed together in a lascivious romp. One participant in the festivities appears to be cross-eyed; in another painted passage, a row of pleasure-seekers stick out their bright-red, dangling tongues. Painted in black on a hot-pink background, Botchy-Botchy’s images sometimes include long, drippy skeins of paint whose evocation of the artist’s brush-handling gestures add to the dynamic feel of his rollicking composition.

We asked Botchy-Botchy if he had ever undertaken a project like this one before. “This is my first time painting an entire space like this,” he explained. “I worked quickly, and the pictures capture the energy of its making.”

He moved a canvas he had been working on, which had been lying on the floor, so that we could see more evidence of his handiwork — a festival of paint splotches cavorting in an abstract composition of their own.

By now, Botchy-Botchy’s magnum opus in the tiny apartment is probably gone. We were glad to be able to catch it before it vanished into the ether.

You can find the artist Botchy-Botchy’s personal website here.