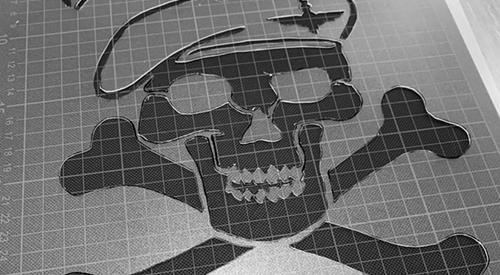 Close-up of a stencil for screen-printing made from and based on the artist Jack McLean’s tattoo design for his paratrooper friend. Photo courtesy of the artist
STOP NEEDLING ME! A PAINTER-DRAFTSMAN CREATES A TATTOO

TOKYO — I'm a painter and maker of drawings; I've been living and working here in Japan for nearly 28 years. I'm from Scotland, where I studied at and earned a degree from the Glasgow School of Art prior to heading to and eventually settling in this part of the world.

Japan is an endlessly fascinating place, and, for artists, there is so much here to explore and from which to draw inspiration, from the beauty and skillful use of materials that one finds in both old and new forms of art, and in everyday customs and gestures. I never get tired of exploring Tokyo.

Recently, Edward M. Gómez, brutjournal's founder and editor in chief, who has long been familiar with my work, reached out to me and asked me if I had ever designed tattoos or if, in fact, I might be sporting some tattoos of my own. "No and no," I replied, knowing that Edward's own professional training was, in part, in the field of graphic design, and that he is very interested in works of art in which draftsmanship plays a strong role.