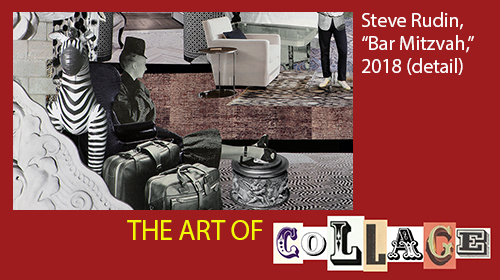 STEVEN RUDIN: COLLAGE AND THE MULTIPART SELF

Looking back at the modern history of psychiatry, one finds that pictures, handicrafts, and other objects or expressions of an artistic nature made by patients who were under observation or receiving treatment were often used for diagnostic purposes. The French modern artist Jean Dubuffet’s recognition and appreciation of the aesthetic character and value of some of the more distinctive creations of this kind, which he regarded as veritable works of art, helped inform his notions about what, in the 1940s, he categorized as “art brut” (literally, “raw art”), coining that new term (which applied to the works of other kinds of marginalized art-makers, too).

For some observers, especially of particular works or bodies of work made by artists whose lives were or have been marked by mental illness, traumatic experiences, or notably dramatic twists and turns, it can be tempting to try to analyze their productions in search of clues to comprehending their outlooks or intentions.

But psychoanalyzing artists through their works can often devolve into a parlor game that ends up limiting one’s understanding — and depth and breadth of appreciation — of their expressions in various media or genres. Such an exercise can also limit the satisfaction to be derived from letting a work of art speak for itself, an approach most formalist observers would prefer and recommend.

With these thoughts in mind, the precisely rendered collage works of the New York-based artist and psychiatrist Steven Rudin both tease an informed viewer into trying to read them for clues about whatever it might be that make their creator tick — as an artist, a thinker, or a professional in his specialized field — and into inspecting them with sharp eyes in search of hidden meanings beyond the literal meanings of the many juxtaposed images of which they are composed.