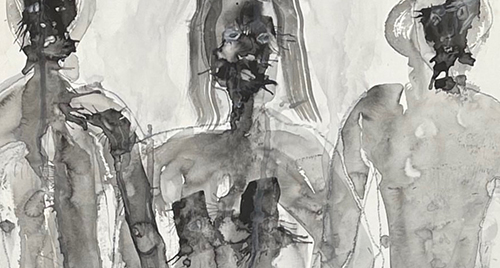 by Edward M. Gómez, in dialogue with Steven Hirsch

Recently, when we asked brutjournal contributing artist and photographer Steven Hirsch if he had ever trained his eye on or aimed his camera at shadows — we already knew that he liked multicolored wigs, psychedelic beach scenes, and bugs — he responded enthusiastically, “Yes, of course, I have!”

With the unsinkable, let’s-do-it! gusto of a kindergartener sticking his finger into a gooey mound of finger paint for the first time, Hirsch reported that, for some time, in fact, he has been experimenting with watercolors in an effort to capture in his paintings on paper the ineffable qualities of light and weightlessness that are the essence of shadows in all their mysterious allure.

To produce his watercolor images of shadows, Hirsch applies thin, transparent washes of color to his paper, sometimes layering them up like a Renaissance oil painter employing a glazing technique. Given the ungraspable nature of his subject matter, in practical terms, he often emphasizes shadows’ silhouettes or their odd, uncertain opaqueness.

Hirsch shared with us the following remarks about his paintings of shadows and, in particular, about his sources of inspiration. The artist said:

“The 1950s was the golden age of classic American horror movies, and the biggest fan of the genre whom I knew was my dad. He would drag me to any movie house he could find in Brooklyn that was playing the latest, greatest horror flick. As a young, impressionable child, I loved them as much as he did. Frankenstein, The Mummy, and Invasion of the Body Snatchers were probably my favorites.”

“The manipulation of shadows is one of the most common atmosphere-creating techniques used in horror films. The fear of the unknown is one of our most primal fears — and what’s more unknown or unknowable than a shadow or whatever a particular shadow might represent? Whose shadow is it?”

“A shadow has no substance: you cannot touch, feel, or smell it. A shadow will follow or trail you, and when one is present, you cannot shake it. Still, you can see it, and a single shadow can scare the heck out of many people. As a youngster, shadows left an indelible mark on my psyche, so much so that, when I tried to fall asleep, I would see monsters and shadows in the dark recesses of my room.”

“When I paint, I dig deeply into my memories, my past experiences, and even my fears. I remember one night when, as I was trying to fall asleep, I called out to my older brother, warning him that there were monsters in my room and unsettling shadows in the dark. He came in and said, ‘That’s crazy. There’s nothing there. Go to sleep!’”

“These paintings are filled with translucent, shadowy figures. Figments of my imagination. Recollections from the horror movies I loved so much, now creeping out of the recesses of my mind.”

[Below: More examples of Steven Hirsch’s paintings of shadows.]