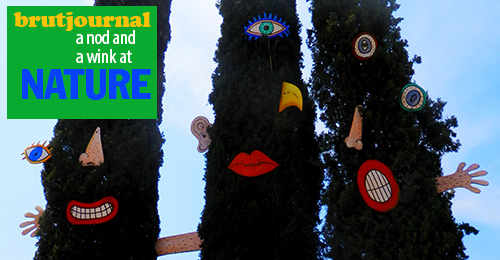 STEVEN FORSTER: INTO THE WOODS!

IN SPAIN, A BRITISH ARTIST DRAWS INSPIRATION FROM — AND WORKS DIRECTLY WITH — TREES

Steven FoRster is a British artist who makes drawings, paintings, mixed-media works, and music, and is also involved in performance; since 1989, he has been based in the Catalonia region of Spain. To examine a summary of the artworks he has created and the multidisciplinary art projects in which he has taken part over many years is to realize that mixing up media and genres is, for FoRster, his standard operating procedure.

Recently, FoRster (Instagram account: @sforstersteven) sent us some photos showing some artworks he had created that were meant to be installed and experienced in nature, fully integrating the human-made with the natural environment. We were intrigued, so we fired off a fusillade of questions, to which the artist kindly responded, letting us in on his thinking and his interest in nature as a source of ideas — and occasional art-making partner.

Steven FoRster told us: “I’ve always been inspired by nature. I grew up in a small village in County Durham, in northeastern England, surrounded by woodlands, streams, rivers, and wild life. Birds have always fascinated me — but not in cages! Later, from the age of 18, I lived in cities — in Bristol, in the southwest of England, and then in London, and in 1989, I moved to Barcelona. Except for the early 1980s, when I was obsessed with clay and ceramic sculpture, during all those years, I mainly worked with discarded objects and materials found in skips [or dumpsters, in American English], making ‘recycle art.’ Environmental issues lay behind my reasons for trying to only use those sorts of materials.”

How did FoRster’s interest in and concern about the natural environment, which was reflected in the mode of art-making he had chosen to develop, eventually take a leap into nature itself? He recalled, “In 2010, my partner Paco and I decided to move from Barcelona to Hostalric, a village in the province of Girona — still within what is known as the Autonomous Community of Catalonia in northeastern Spain. Since making this move, objects that I’ve found in the woods have become the main focus of my art and my inspiration. This is a region in which cork is widely harvested. Farmers remove a tree’s bark, and it carries on thriving. So, to me, wine-painting [actually using wine as paint] and cork-sculpting seemed just right!”

At some point, the artist’s studio and the outdoors — nature in its original setting — simply fused as his multipurpose work-and-exhibiting space.

FoRster observed, “One of the benefits of moving out of the city is that, now, I have a great, economical studio space, plus the ability to work outside in the lane behind my house, which abuts a huge area of woodland and mountains. It’s a total privilege to be able to work in the shade of the trees. I’m a bit of a fan when it comes to trees.”

In effect, FoRster’s life journey has come full circle, bringing him, as an adult artist, back to a setting that resembles the one in which he grew up. A musician who regularly presents concerts in small venues, FoRster said, “Even though I loved living in London and Barcelona, and for years had no intention of moving out to the countryside, probably what brought me back to the woods and mountains was a recording studio a friend had set up in an old farmhouse in the middle of the nearby mountains nearby.”

The artist added, “I spent a lot of time there, always going back and forth between Barcelona and the recording studio. That period of commuting reconnected me to the deliciousness of the experience of walking through the forest and enjoying this kind of environment’s pure sounds, and so on. I’ve come back to my roots, I suppose.”

When we asked FoRster how he regards his — and his art’s — relationship with nature today, he was quick to declare, suggesting how important it is to take good care of the natural wonders surrounding him, “We are the forest!”