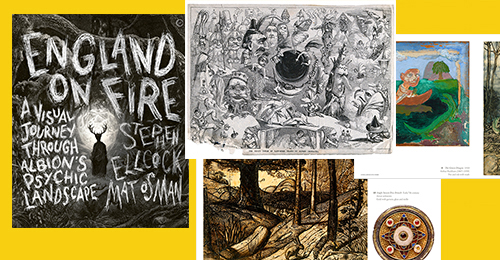 A GRAND PORTFOLIO OF UNEXPECTED, SOMETIMES ECCENTRIC IMAGES CAPTURES AND REVEALS THE SPIRIT OF A COUNTRY AND ITS PEOPLE

England on Fire: A Visual Journey Through Albion’s Psychic Landscape
by Stephen Ellcock and Mat Osman
Published simultaneously in the United Kingdom and the United States by Watkins Publishing, 2022
ISBN 9781786784285

The publication of a new book by Stephen Ellcock, the British, indefatigable collector-curator-connoisseur of images, images, images — he is happily at home in an inundation of paintings, drawings, photographs, old maps and prints, tapestries, game boards, comics, and more — is always an event.

Now, with the writer Mat Osman, he has produced England on Fire: A Visual Journey Through Albion’s Psychic Landscape (Watkins Publishing, 2022).

It’s a picture-filled book that, as Osman writes, is partly “about English art.” It’s also a volume for which, as Osman notes, Ellcock “scoured England’s dark corners” for visual evidence of “the nation’s true nature,” discovering and then packing its pages with imagery that may be seen as “more furious and magical than any Shakespeare play.”

Referring to the ancient name for England that is used poetically today, Osman introduces England on Fire by observing, “Here is an Albion unhinged, where magic and rebellion and destruction are the horses to which the country is hitched. In place of that tired rogues’ gallery of Lords and Ladies, we find images made by unknown artists or nameless groups. Standing stones and forgotten photographic plates. Chalk horses and discarded film stills.”