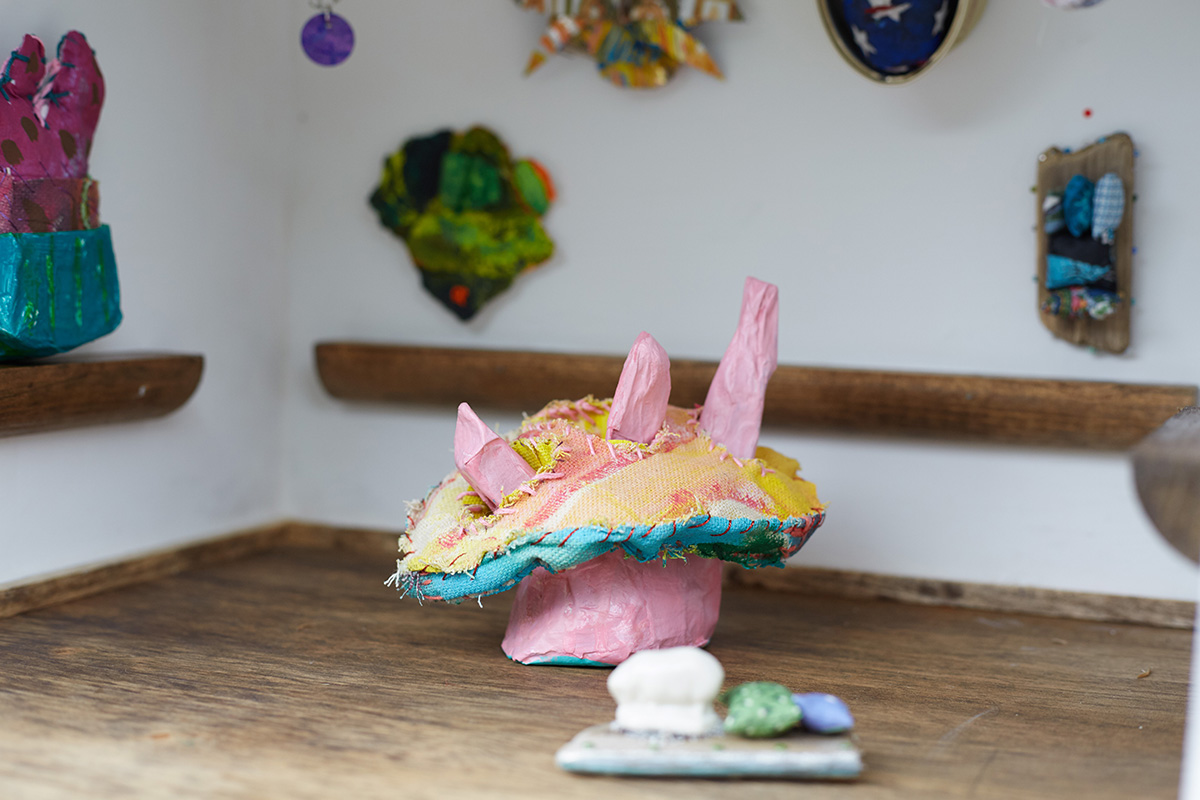 Now on display at the Birdhouse Gallery, Hancock, New York: A debut exhibition of some very tiny art. Photo by Bill Westmoreland.
SHE OPENED A GALLERY IN A BIRDHOUSE

Sometimes, big ideas can entice, succeed — and explode — on a remarkably small scale. Take the new Birdhouse Gallery, which the artist Sunny Chapman has founded and opened earlier this year in Hancock, a small town in upstate New York, on the east bank of the Delaware River, which serves as the region’s border with Pennsylvania, immediately to the west.

Chapman, who, with her partner, is normally based in New York City, in Brooklyn, told brutjournal, “We bought two run-down houses in Hancock in 2019 to use as a summer/weekend home and studio. When the pandemic started, we decided to stay here and have been here most of the time except for brief visits to Brooklyn.”

Her impulse to create the Birdhouse Gallery was, Chapman explained, inspired by some friends’ earlier, somewhat similar undertaking — by two other acquaintances who had dared to think small.

The artist recalled that, more than ten years ago, she visited these friends “who had made a gallery of tiny art” in a rectangular-shaped inset in one of their apartment’s walls; that space measured roughly one foot by two feet in size. Chapman did not want to directly copy their project, but the idea of presenting art on a miniature scale stuck with her. Later, she noticed in Florida and elsewhere the trend of so-called free libraries — free-standing little sheds or cabinets set out in front of suburban houses or on roadsides where passersby could drop off or borrow donated, used books. Chapman appreciated the non-wasteful, community-nurturing ethos of such homemade, public-access facilities.

More recently, the artist said, her idea to create a tiny gallery of her own finally “came to life.” She noted, “I needed to feel connected to other artists, who had been having a rough time throughout the pandemic. I wanted to help them in whatever small way I could. So my partner built the gallery, I sent out an open call, and we opened in May 2021.” Because she owns the property on which her minuscule art venue is located, she did not need any special building permits.

After all, the gallery is perched atop a pole, lodged in a birdhouse!

We asked Chapman what she looks for, now that she has become a dealer-curator, when considering artworks to show in her new venue.

She replied, “I see something and think, ‘Wow, that’s interesting!’. The work I like is definitely out of the mainstream and doesn’t follow trends. I like artists who follow their own vision and art that ignores the rules and is made of non-traditional, especially recycled materials or that is made in non-traditional shapes.” She cites, for example, “the artist Carol Diamond’s sculptures made with broken glass, Christina Massey’s ‘little buggers’ made from craft-beer cans, and Mollie Thonneson’s abstract paintings made from scraps and remnants of fabric.”

She also noted, “The majority of the artists I’ve worked with don’t typically make tiny work but have done so just for my gallery, which I think is amazing. That’s another quality I look for — that adventurous sense of being willing to try new things, like making tiny art for a gallery in the middle of nowhere.”

Artist Sunny Chapman’s website, which includes a section about the Birdhouse Gallery:
www.sunnychapmanart.com