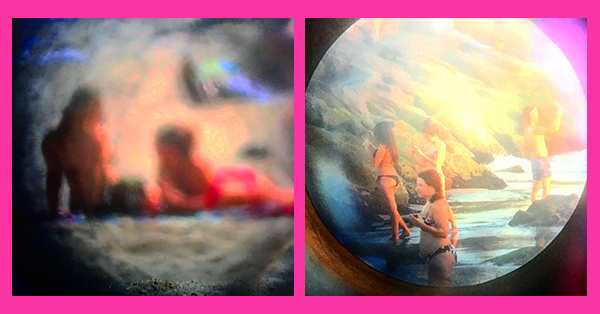 BEACH SCENES DON’T GET ANY GROOVIER THAN THESE

by Edward M. Gómez, in conversation with Steven Hirsch

As a regular brutjournal contributor, the New York-based photographer and visual artist Steven Hirsch has brought us examples of his own mixed-media collage experiments and boldly colored paintings bursting with joie de vivre, no matter whether he is portraying a naked pole dancer or a serial killer.

As a longtime news photographer for New York’s highly competitive tabloid newspapers, which love nothing better than a salacious scandal with what Broadway producers refer to as “legs” — the potential to be of long-running interest, that is, the better for ticket sales — Hirsch has also spent many years as a regular photographer of petty and big-time criminals passing through the courts in downtown Manhattan.

The courts are one of his routine beats, and in their corridors filled with pathos, injustice (coming mostly from the bench), and woe, he has shot some of the best photo-portraits in a large body of work that future cultural historians will surely regard as one indefatigable lensman’s human-comedy document of a wayward, decadent age.