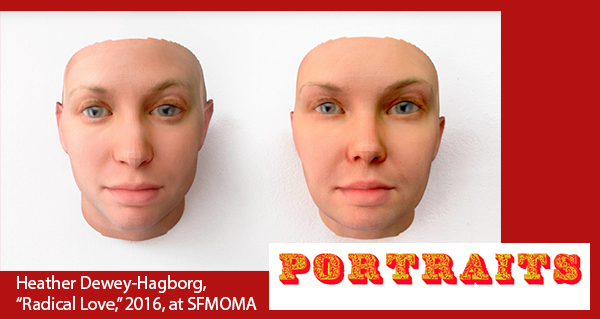 Recently, Sarah Fensom, brutjournal’s U.S.A. West Coast bureau chief, traveled from her base in Los Angeles to San Francisco to see Speculative Portraits at the San Francisco Museum of Modern Art, an exhibition in which she discovered some potent connections between the unusual works on view and the city in which they were being presented.

Part I: Matter and Data

The wall text introducing Speculative Portraits, a teacup-sized exhibition on view at the San Francisco Museum of Modern Art through September 5, quotes the Bay Area artist Lynn Hershman Leeson, who has long explored the roles that media and technology play in contemporary scociety. It states, “Hershman Leeson has observed that ‘artists are the antibodies of culture,’ given the role artists can have in identifying and bringing attention to various ‘toxins,’ or societal issues, through their work.”

Here, Hershman Leeson’s “Room #8”(2006-18), a work SFMOMA acquired in 2019, serves to anchor an exhibition that radically expands the meaning of “portraiture” with her own self-portrait made up of a custom-formulated antibody and a vial of synthetic DNA that contains an archive of the artist’s creations. To make “Room #8” Hershman Leeson and her scientist collaborators converted image, text, and video elements in the artist’s archive into digital binary code — which consists only of ones and zeroes — and then into the double-helix form of DNA. Exactly how such binary code can be converted into DNA, which is made up of nucleic acids, is a process about which an explanation has not yet been published.

It is, however, a cornerstone of the work of George Church, a geneticist at Harvard University who was one of the scientists with whom Hershman Leeson collaborated to produce “Room #8.” Church has been referred to as “the father of synthetic biology.” In the gallery in which Hershman Leeson’s unusual work is on display, vials containing the two specially made substances are presented in an infinity-mirror box, which may be viewed through a window in a laboratory door installed in one wall. Blue light floods the space the box occupies, giving it a clinical aura.