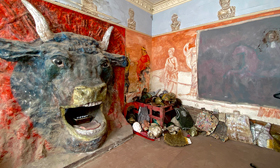 RON’S PLACE: A WORLD “WITHOUT PREJUDICE”

NEAR LIVERPOOL, A DECEASED ARTIST’S HOME BECAME A FANTASY PALACE

In Birkenhead, a city situated on the Wirral Peninsula, across the River Mersey from Liverpool, in northwestern England, stands a nondescript, typical row of red-brick, Victorian-era single and semi-detached houses. However, until his death in 2019, an apartment in one of these houses was the residence of Ron Gittins, a self-taught artist, aesthete, and all-around visionary, who transformed his living quarters into a fantasy retreat filled with the spirit of history and the stylistic expressions of past ages — of ancient Egypt, Greece, and Rome, and also of the era of the globe-spanning British Empire.

Now, led by Gittins’ niece, Jan Williams, who, with Chris Teasdale, runs an itinerant venue, The Caravan Gallery, an urgent effort is being made to raise funds to purchase the building that houses Ron’s Place, as the late artist’s art-filled home has become known. Their goal is to restore and preserve its contents, and, as Williams says, to allow the refurbished property to become "a springboard for new creativity, and a powerful source of healing, inspiration, and well-being in the community." Many of Gittins’ paintings, wall decorations, hand-built furnishings, and sculptures are in dire need of conservation and repair.

Recently, Cathy Ward, brutjournal’s London-based artist-correspondent, traveled to Birkenhead to speak with Williams about the physical condition of and the prospects for saving her late uncle’s unusual, live-in art environment.

Jan Williams did not know in exactly what kind of conditions her uncle Ron, who was born in 1937 and died in September 2019, had been living before he passed away, but she did have an inkling that, when she would later visit his home, she would be in for some surprises.

She told me, “We had seen some of his paintings before, and I really didn’t like some of them. They were almost like soft-porn pictures of women. He had some kind of mental-health issues; I don’t know what his diagnosis actually was, but he had been sectioned [note to non-British readers: sent to a psychiatric institution] a few times when he was younger.”