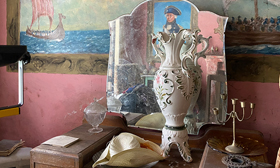 RON GITTINS, A MAN OF TIME AND TIMES

WAS THE LATE ARTIST’S GREATEST CREATION “RON” HIMSELF?

BIRKENHEAD, ENGLAND — Jan Williams is an artist, photographer, and cultural commentator who has spent years documenting the many different communities she has discovered while touring Britain with her collaborator and partner, Chris Teasdale. Together, they run an itinerant venue, The Caravan Gallery, which is, literally, a gallery on wheels, without a fixed address, housed in what Americans refer to as a “trailer.”

I knew that Jan was someone of great personal integrity and strong social values, and that she had a knack for interacting smoothly with the sometimes difficult individuals she and Chris had encountered in the various communities where they had stopped to present temporary exhibitions of their color photographs of such places and their residents to local audiences.

Recently, prior to heading to Birkenhead, on the Wirral Peninsula, across the River Mersey from Liverpool, where I visited the art-filled home of Jan’s late uncle, the artist Ron Gittins (1937-2019), I met up with her for an informative chat. Then we went together to see “Ron’s Place,” as it has become known. (See my separate interview with Jan in this issue of brutjournal.)

I was curious about how family trees grow and evolve, and how creativity is expressed from generation to generation by members of a family like Jan’s. Given her constant collecting, prolific art-making, and abundant creative energy, it seemed that there were definitely some similarities between Jan and her relatives that had been passed along through her family’s gene pool. But when it comes to personalities, the late Ron Gittins and his niece were what we call “chalk ’n’ cheese.”

Now, here are some notes and impressions of my visit to Ron’s Place, the apartment in Birkenhead that Ron Gittins left behind after his death. It is filled with his handmade sculptures, wall paintings and decorations, dramatically outfitted fireplaces, and piles and piles of books and artworks-in-progress.

Upon arrival, I learned that some sculpted figures representing the Battle of Actium of 31 BCE that Ron had made, and that had guarded his front door, had been sledge-hammered and removed by the owners of the building, without any forewarning. Alas, they had “passed on.” Meanwhile, the original, exterior front door to the building in which Ron’s apartment was located had been covered with a fine, bandage-like scrim, a remnant, perhaps, of a barely started project that, one might imagine, would have somehow complemented the Egyptian motif that was visible on a nearby pillar.

The building’s cruddy entrance-hall walls at first seemed devoid of anything except damp, but I noticed unfinished archways that had been drawn on their rough surfaces. Good that I had worn my Wellies — Wellingtons, that is, or knee-high boots. Then I entered a hallway whose walls Ron had painted with hieroglyphs and images of sarcophagi and ancient-Egyptian gods. It didn’t quite feel as though I were walking through a valley of death and into a tomb, but Ron certainly had done his best to conjure up the spirit of a long-ago dynasty.

As it turned out, by the time of my visit, Ron’s cavernous apartment had been somewhat cleaned up, although a lot of repair work still needed to be done. A dedicated team of collaborators has been helping Jan sort through Ron’s mountains of artworks and belongings. They’ve been digging into and trying to make sense of the indescribable contents of innumerable, knotted-up carrier bags, much of which, apparently, the artist had intended to use to produce his fantastical creations.

Inside the apartment, Jan and her team edged their way through canyons formed by high piles of papers and magazines — the raw materials Ron used to create the many, seemingly amputated legs and dismembered heads of ancient emperors and Greek philosophers that were scattered around the flat. I got the sense that, somehow, Ron’s art served to report — or regurgitate — our contemporary, 21st-century news back to the spirits of the ancient world that had seized his imagination.

Lisa Slominski, an American, London-based art consultant, has noted, “To encounter Ron’s Place, unlike viewing a painting in a museum, is to step over the threshold and be completely engulfed by his creative practice. I felt transported. Ron’s merging of personal subject matter with historical references creates a powerful engagement.” She believes that the unusual art environment Ron created really should “be preserved,” for its occupied a unique place within “the cultural landscape of the United Kingdom.”

Jo Farb Hernández, the American art historian who was formerly the longtime director of SPACES Archive in California (and who has contributed vivid reports to brutjournal about site-specific art environments in Spain; see her report about José Escuredo Vega in this issue), has observed, “Ron’s Place is an outstanding example of a unique personal space that, even as it may challenge aesthetic and conceptual community values, has great potential significance in terms of enhancing public understanding of and education in the arts.” The “audacity” of Ron’s Place, Hernández has noted, “has much to teach students, academics, and even the general public about giving free rein to one’s creativity.”

Of course, it goes without saying that, in Ron’s apartment, Jan and I found a canoe made of old cardboard boxes, which had washed up in the artist’s underwater-themed bathroom. For Ron, lying back in the heavy, cast-iron vessel that was his bathtub, immersed in hot, steaming water in a cold well of a bathroom — was it a 20,000 Leagues Under The Sea experience that he savored, imagining, as he enjoyed a good soak, that he was battling deep-ocean leviathans? Or that he had joined the famed marine explorer, Jacques Cousteau, in a deep-sea-diving craft, surrounded by huge schools of fish and other creatures? Above the bathtub, a cobweb heavy with age hung languidly like a ship’s hammock.

It seemed that, living in a damp climate, near the sea, Ron had appreciated good interior heating. The theatrically decorated fireplaces he created in his home became the centerpieces of its different rooms. Their elaborate, sculptural frames depict an enormous Minotaur symbolizing ancient Greek civilization and its myths; a triumphant, roaring lion of old Rome; and in a Georgian, seafaring-themed room, a pair of gaping codfish. In his kitchen, Ron set up an authentic, Roman bread oven.

Ron was a fan of British comedy. He left behind countless videotapes of 1970s TV programs. He surely would have watched the comic duo Morecambe and Wise on television; one of the most popular British comic acts ever, Eric Morecambe and Ernie Wise performed together right up until Morecambe’s death in 1984. On TV, Ron also would have caught comedy shows with horribly scripted sketches featuring showbiz personalities who had been invited to appear only to be made fun of, with ill-fitting costumes and lousy lines. A lot of this old comedy put a lot of emphasis on the visual gag of a performer making a “grand entrance.”

Considering Ron’s well-known penchant for theatrical behavior, I could understand how that old style of British comedy would have appealed to him. The truth is that, back in the day, it appealed to all of us!

Our comedy was often served up to us by men of awkward sizes wearing women’s dresses. In fact, come to think of it, a woman’s dress was something of a uniform for many male comics throughout Britain. If this was a trend that made us seem eccentric to other nations, the fact is, we were. I cannot help but think that, somehow, Ron’s papier-mâché figures seem to cross and blur the lines between ancient history and that old-style comedy.

What to make of his sculpted figures, which often are missing their breasts, heads, or arms? They’re both strange and amusing, with the look of the petrified figures, following an ancient volcanic eruption, one finds among the ruins of Pompeii. Similarly, Ron’s figures stand forever frozen in time — in the sitting room of a now-deceased, madcap artist in a cold, damp spot in northwestern England.

Apparently, at one point Ron used strips of leather taken from an old school satchel to make straps for his own legionnaire’s armor. Looking at that satchel, I imagined that, as a young boy, he had used it to carry home from school the precious reading material that would fuel his imagination and one day ignite his astounding artistic creativity. Adept at casting, Ron regarded everything as material to be utilized to conjure up something else. For him, everything he brought into his flat held what could only be called, from his artist’s point of view, pure potential.

Ron was ingenious in his craftsmanship and cunning in his fakery. His replica civil-war muskets are amazing in their attention to detail. However, when you hold them, the lightness and the crackle of the paper from which they’re made may break their spell.

Ron was not so much a man of his time as he was a man of all times. Preoccupied with history — its events, myths, symbols, and lasting influences on society and culture — he was someone whose spirit was open and creative. He became entranced by much of what he encountered in the world. In his work, he channeled the culture as it arrived to him via literature, films, radio, and television. His was a peculiar, deeply personal art, in which “Ron” was probably Ron’s greatest, most puzzling creation.

Patreon page of Jan Williams and other supporters of the effort to preserve Ron’s Place as a site of cultural and historical significance: https://www.patreon.com/ronsplacewirral