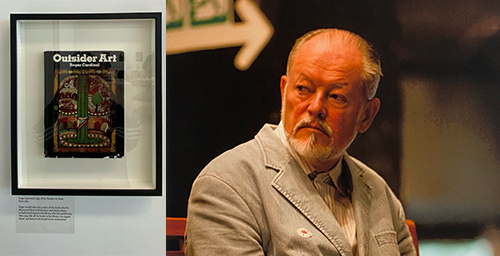 IN ENGLAND, A RECENT TRIBUTE EXHIBITION AND BOOK CELEBRATED THE SCHOLAR-TEACHER’S LEGACY

The late British art historian Roger Cardinal (1940-2019) is perhaps best known for having coined the term “outsider art” back in the early 1970s as an English-language alternative — for it was not exactly an equivalent — to the French label “art brut” (literally, “raw art”). The French modern artist Jean Dubuffet (1901-1985) had invented that earlier tag in the mid-1940s to describe the creations of non-academically trained art-makers whose paintings, drawings, collages, sculptures, carvings, and other unique, hard-to-classify productions could not be easily placed in any familiar, established art-genre categories.

Such self-taught artists, Dubuffet noted, either by choice or by the force of their lives’ circumstances, tended to find themselves living and creating their art on the margins of mainstream society and culture, even if, often, they were the products of or deeply rooted in the cultures and traditions of particular places and peoples.