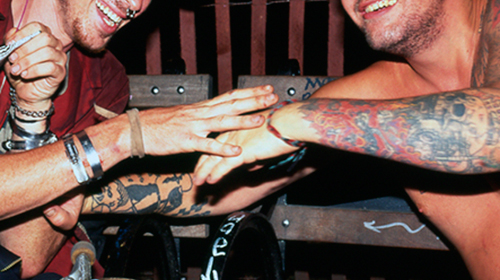 The punk aesthetic expressed in the tattooed looks and piercings of some New York City street punks, 1994. Photo by James Wojcik
HISTORY LESSON: FOR PUNKS, THE ALLURE OF DEFIANT TATTOOS

brutjournal contributor Daniel Wojcik is a professor at the University of Oregon in Eugene, where he specializes in folklore studies, subcultures, art, and alternative religions. He is the author of Punk and Neo-Tribal Body Art (University Press of Mississippi, 1995), Outsider Art: Visionary Worlds and Trauma (University Press of Mississippi, 2016), and the forthcoming monograph Artist as Astronaut: The Otherworldly Art of Ionel Talpazan, which will be published in the near future in the United Kingdom by Strange Attractor and distributed in the U.S.A. by MIT Press. Excerpts from the new Talpazan book were published in brutjournal's September 2021 issue.

Like the members of youth subcultures of earlier eras, the punk rockers who emerged in the United Kingdom and the United States in the mid-1970s created an elaborate system of body adornment, refiguring and recontextualizing images and objects through the process of bricolage. In doing so, they generated new and oppositional meanings for such source material, meanings that reflected their defiant, anti-establishment worldview.