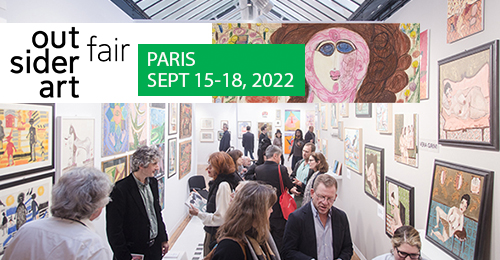 FOUNDED TEN YEARS AGO, THE NEW YORK EVENT’S EUROPEAN SISTER EVENT IS BACK AS THE PANDEMIC WANES

That lovely fair has returned — the Outsider Art Fair Paris, that is, the sister of the New York-based annual gathering of dealers, collectors, and other admirers of art brut, outsider art, and the unusual concoctions of self-taught artists, which was first presented in the French capital a decade ago. The Paris version of the event last took place in its full form in 2019, then along came the coronavirus pandemic, which forced it to scale back dramatically.

This year, OAF Paris will take place from Thursday, September 15 through Sunday, September 18 at Atelier Richelieu, a building located at 60 Rue de Richelieu in the city’s second arrondissement, very close to the Richelieu branch of the Bibliothèque Nationale and within easy walking distance of the Quatre Septembre and Bourse station stops on the Métro’s number 3 line.

While the Paris fair serves as a showcase for European dealers to present their offerings, over the years, exhibitors from other parts of the world also have participated in the event. (This year, galleries from the United States, Mexico, and Senegal are among the non-European exhibitors that will be taking part.)

Over time, of special interest to informed observers of the broader, international art brut/outsider art scene have been the ways in which dealers from the U.S., in particular, have introduced the works of American outsider artists at the Paris event, along with the reactions of its local audience to such offerings. To be sure, the showing of certain exemplary forms of American outsider art side by side with their definitive European art brut counterparts has allowed viewers to recognize and appreciate certain distinctive characteristics between the two historical, creative camps.

Noteworthy at this year’s Paris fair will be the first-ever presentation by the London-based Gallery of Everything, a project of the British art collector James Brett, the owner of the itinerant Museum of everything collection. Timely, too, will be a showing of works by Ukrainian folk artists, including Maria Prymachenko(1909-1997), whose work appears in the current 2022 Venice Biennale, by Rodovid Gallery, a venue that is based in Kyiv.

The New York art dealer Andrew Edlin, who runs an eponymous contemporary-art gallery that often presents the work of notable self-taught artists, owns the company that produces the Outsider Art Fair’s two different, annual editions. The European fair’s director, Sofía Lanusse, who is based in Paris, has been working closely with her New York collaborators and a local team to organize this year’s event.

Looking ahead to the grand opening of this year’s fair, Edlin told brutjournal: “The art community in Paris is passionate and feels excited to see the fair back again. We’ve done our best with online viewing rooms [which have become a mainstay of many art fairs during the coronavirus period], and the spreading of the word about the incredible dynamism of our 30th anniversary New York fair this past March has helped create a sense of anticipation for Paris. This will also be the first time the OAF Paris will not be taking place concurrently with FIAC [the annual Foire Internationale d’Art Contemporain], so we hope to receive more local attention and focus from the press.”

Although the Paris fair is smaller than its New York counterpart, the diversity of its offerings tends to be rich, and its programming scope is ambitious. This year, for example, in addition to exhibitors’ presentations in their booths, the fair will include two thematic exhibitions. One of them, I Wish I Could Speak in Technicolor, is being curated by Maurizio Cattelan (the author of such contemporary-art provocations as the Guggenheim Museum’s 18-karat-gold toilet and that notorious banana that was duct-taped to an art-fair booth’s wall) and Marta Papini, the artistic organizer of the 2022 Venice Biennale. This show will examine the life and work of the American outsider artist Eugene Von Bruenchenhein (1910-1983).

A second exhibition, The Underground Is Always Outside, organized by the cartoonist Aline Kominsky-Crumb and the author-curator Dan Nadel, will feature original comic art by such artists as Robert Crumb, Gilbert Shelton, Bill Griffith, Art Spiegelman, Phoebe Gloeckner, Diane Noomin, Willy Mendes, and Sharon Rudahl, among others.

Art fairs thrive on — and their most avid fans expect — fresh, don’t-miss-it discoveries and the appearance of new participants bringing fresh merchandise and ideas. This year, the Paris fair will welcome suns.work, a gallery based in Zürich, which will offer works by the well-known Swiss art brut creator Hans Krüsi (1920-1995), as well as mixed-media works by the Jamaican record producer, composer, and performer Lee “Scratch” Perry (1936-2016), the great pioneer of dub reggae, who is less well known for his activity as a visual artist.

Another newcomer to this year’s fair: Yataal Art, from Senegal, which will show the work of Pape Diop, an artist based in Dakar who uses found materials to create his art and who is known for using just about anything — a cigarette butt, a piece of charcoal, coffee grounds — to draw on just about anything, including the exterior walls of buildings or even the ground.

Edlin noted, “There will also be a presentation of works by the Inuit artist Shuvinai Ashoona, who was born in 1961 and is receiving newfound acclaim as a result of her inclusion in the current 2022 Venice Bienniale.”

In 2021, the French collector Bruno Decharme donated more than 900 works made by 242 artists from his vast holdings of art brut to the National Museum of Modern Art, which is housed in the Pompidou Center in Paris. That headline-making gift instantly changed the character of and suggested a shake-up to come in the established art-historical narrative of that museum’s presentation of the art of the 20th century.

With this development in mind, Edlin observed, “This will be our first fair in Paris since Decharme’s groundbreaking donation to France’s National Museum of Modern Art. We would imagine that such an important event may have increased interest in our field and provoked a desire for works of art brut and outsider art among members of the art-collecting community.”