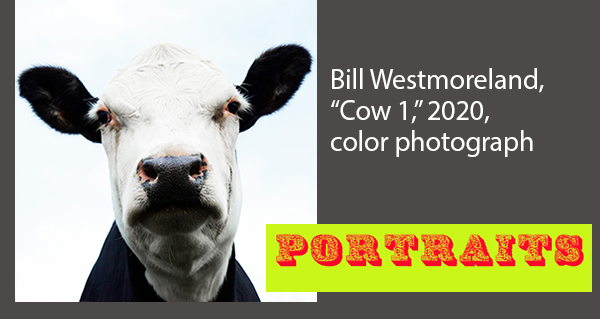 THE ANIMALS ARE READY FOR THEIR CLOSE-UPS: BILL WESTMORELAND’S PHOTO-PORTRAITS OF COWS

Here’s a question that is more photo-aesthetic than Freudian: When is a photo of a big, familiar farm animal not just another generic, journalistic or documentary nature scene of the kind that shows up routinely in newspaper, magazine, and television reports but instead may be seen as an artistic exercise in capturing a likeness of a specific subject — as a real portrait, that is, marked by a sensitive photographer's ability to magically seize and preserve the discernible but intangible energy that radiates from his or her particular model, an individual being with presence, personality, and soul?

That’s the question the photographer Bill Westmoreland’s crisp, potent pictures of cows being cows out in their pastures in rural, northeastern Pennsylvania seem to provoke with their spare compositions in which the big beasts’ faces can be seen in revealing close-ups, not unlike those of the many Broadway stars and jazz and rock performers whose portraits he has shot over many years.