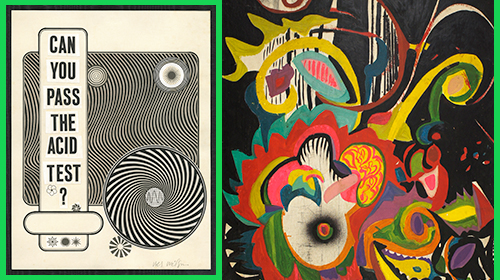 These two works will be on view in the exhibition Field Trip: Psychedelic Solution, 1986-1995, at the 2022 Outsider Art Fair in New York in early March. Left: Wes Wilson, “Acid Test,” 1966, ink and collage on paper 11 x 8.5 inches. Right: Detail from an untitled painting by Olga Spiegel, 1965, oil on board, 44 x 27 inches. Both works from the collection of Jacaeber Kastor. Photos courtesy of the collector
AT OAF NEW YORK, A PSYCHEDELIC BLOW-OUT

As brutjournal looks ahead to the 2022 Outsider Art Fair, which will take place in New York from March 3 through March 6, we note, in particular, that four special-themed, guest-curated exhibitions will be presented this year within the broader structure of the fair. One of them, Field Trip: Psychedelic Solution, 1986-1995, is being curated by the artist Fred Tomaselli, whose own work has often been described as psychedelic and who, in the past, included actual pharmaceutical pills among the materials he used to make his paintings.

Field Trip will feature works from the personal collection of Jacaeber Kastor, the founder and director of the Psychedelic Solution Gallery, which operated in downtown Manhattan’s Greenwich Village neighborhood from 1986 to 2004.

Tomaselli’s survey will include works by artists who are represented in Kastor’s collection, as well as others whose works will be borrowed for the occasion. Among them: Isaac Abrams, Joe Coleman, Bruce Conner, Robert Crumb, Alex Grey, Rick Griffin, Allyson Grey, Gary Panter, Spain Rodríguez, and S. Clay Wilson.

About this line-up, Tomaselli said, “We are keeping it to art and artists that Jacaeber handled, plus a few artists who were inspired by his shows. It’s not meant to be the definitive show on the subject.” Still, the selection of hippy-trippy artworks he is bringing together, some from psychedelic art’s heyday of the 1960s and 1970s and others, which share their spirit, of more recent vintage, could still boggle some minds and evoke the memorable dictum of the American psychologist Timothy Leary, the high priest of hallucinogenic drugs who, at a press conference in 1966 declared,

Leary was suggesting that the use of such perception-altering substances could allow “trippers” to withdraw and find freedom from society’s hierarchies, conventions, and expectations.

The OAF exhibition will include an untitled, oil-on-board abstract painting by Olga Spiegel in which colorful organic and plant-like forms surge forth in an explosion of fecund, unstoppable growth from a plain, black background, and the visionary painter Alex Grey’s picture of Dr. Albert Hoffman, the discoverer of LSD.

Rendered in a fiery palette of yellow, orange, and red, this image penetrates the scientist’s body and psychic innards in a hagiographic tour de force that surrounds his central portrait with small depictions of or allusions to famous cultural figures who either took LSD or advocated for its use, including the artist R. Crumb, the Beatles George Harrison and John Lennon, Jimi Hendrix, and the artist Keith Haring. These smaller images surround that of the venerable Dr. Hoffman like a legion of boddhisattvas in the company of a Buddhist deity.

Among other works, Tomaselli’s exhibition will also include “Acid Test” (1966), a drawing-collage by the emblematic psychedelic artist Wes Wilson, who died two years ago and was well known for the posters he created in the 1960s for rock concerts the music promoter Bill Graham presented at the Fillmore in San Francisco. Robert Williams’ original painting-layout for a poster of an exhibition of his works that was shown at Kastor’s Psychedelic Solution Gallery in 1988 will be on display, as will Allyson Grey’s symbol-filled grid, “Complementary Planned Randomness,” a painting in oil on wood from 2018.

About the works in the exhibition, Tomaselli observed that their character and content “swing from funny, to cosmic, and from the spiritual to the political.” He noted that, in the compositions of some of the works he has chosen, “every inch is covered in tight ornament,” while some feel more “loose and expressive,” and others appear “as clear and minimal as the sky.”

In the works to be exhibited, he said, “There’s a music angle, a raunchy underground-comix angle, and a religious/cosmic angle all happening at once. Some of this stuff is brand new, while some goes way back to at least the late 1950’s. While I tend to be partial to the early stuff, interesting things kept happening and still keep happening.”

We asked Tomaselli if, after two years of a global pandemic, during which people around the world have been looking for salvation to a different kind of pharmaceutical concoction — vaccines — there might be something timely about revisiting psychedelic art and thinking about it in the context of today’s public-health crisis and other big concerns.

He noted that, as he sees it, this kind of art has been “quietly influencing ‘serious’ artists for a long time.” Referring to the hallucinogenic drugs that inspired so much classic psychedelic art of the past, he replied, “I’m not sure, but a lot of people feel that psychedelics bring an intense feeling of interconnectedness toward others and to the web of life. In an age of fracture, this can’t be a bad thing. Good psychedelic art attempts to conjure the landscape of inner space, which turns out to be pretty vast. If you can’t go outside, you might as well go inside.”