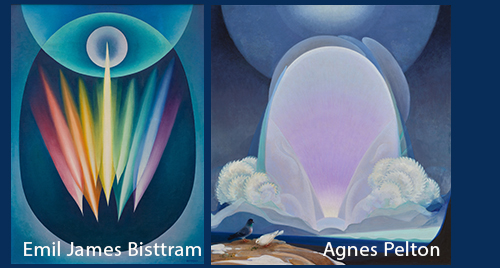 ON VIEW IN L.A.: AN ART OF PURE TRANSCENDENCE

LOS ANGELES — Exactly what was, and who were the members of the Transcendental Painting Group, one of the less well-known movements in the annals of modern-art history?

Another World: The Transcendental Painting Group, 1938-1945, an exhibition that recently opened at the Los Angeles County Museum of Art (LACMA) and is scheduled for a long, six-month run, answers those and other, related art-history questions in detail; featuring 80 works by 11 artists who were associated with the group — among others: Agnes Pelton, Lawren Harris, Emil Bisttram, and Raymond Jonson — it includes paintings and works on paper dating from the 1920s through the 1950s. Another World is the first major museum exhibition dedicated to the ideas and accomplishments of the artists who took part in the Transcendental Painting Group.

Organized by Michael Duncan, an independent curator, and the Crocker Art Museum in Sacramento, California, Another World already has been presented at the Albuquerque Museum in Albuquerque, New Mexico; the Philbrook Museum of Art in Tulsa, Oklahoma; the Baker Museum in Naples, Florida; and the Crocker. Los Angeles is its final stop, and it’s a fitting one, too, for four of this survey’s standout paintings, by Pelton, Bisttram, Jonson, and Ed Garman, come from LACMA’s own holdings.