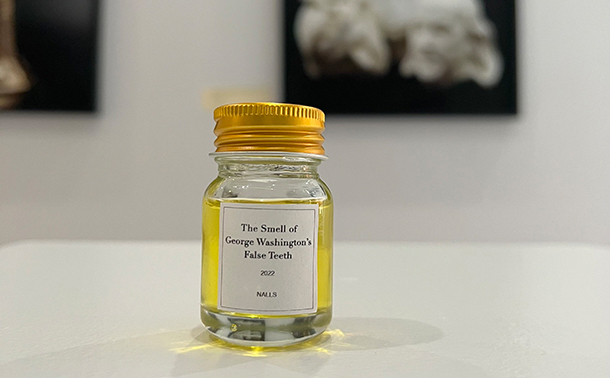 In New York, the dealer Andreas Keller’s gallery, Olfactory Art Keller, specializes in unusual works that call attention to the sense of smell and actually incorporate it into the ways in which they’re meant to be experienced. Above: A work by the artist Gayil Nalls, from her exhibition The Politics of Perfume Objects: The Avon Suite, which was recently presented at the gallery. Photo courtesy of the artist and Olfactory Art Keller
OLFACTORY ART KELLER, SPECIALIZING IN SCENTS

NATURE, IN THE FORM OF THE SENSE OF SMELL, IS FRONT AND CENTER IN A NEW YORK GALLERY’S EXHIBITIONS

NEW YORK — Something smells unmistakably original and intriguing on Henry Street, in downtown Manhattan, where the eastern edge of Chinatown meets the southern end of the Lower East Side. There, a whiff of the vibe that’s found in larger hipster zones across the river, in Brooklyn, wafts through a patch of neighborhood surrounding the East Broadway subway station. In-between Chinese grocery stores and restaurants, overpriced coffee shops, head shops, and bodegas, an occasional contemporary-art gallery picks up the art-world pulse that courses from the East Village south through the Lower East Side and the Bowery to this spot.

Here, early last year and about a year into the coronavirus pandemic, Andreas Keller opened Olfactory Art Keller, a gallery dedicated to the presentation and promotion of art that makes use of scents or that actively engages its observers’ sense of smell.

As gimmicky as such confections might at first sound, all of the art Keller has found and showcased at his gallery has been as aesthetically rigorous as the most ambitious conceptual art anywhere, and often its provocations have plenty of resonance. The German-born Keller brings some serious bona fides with him to his work as an art dealer, too.