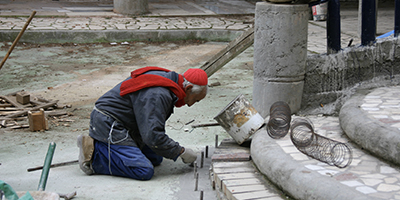 The Spanish artist Justo Gallego Martínez, who spent some 60 years almost single-handedly building a cathedral near Madrid, died late this past November at the age of 96. Here, he is seen setting stairs leading to the enclosed interior courtyard of his massive structure. Photo ©2021 Jo Farb Hernández
OBITUARY: SELF-TAUGHT CATHEDRAL-MAKER JUSTO GALLEGO MARTÍNEZ

NEAR MADRID STANDS HIS LEGACY, A GRAND STRUCTURE HE BUILT ALMOST SINGLE-HANDEDLY

Justo Gallego Martínez, who spent some 60 years almost single-handedly building the enormous Catedral de Nuestra Señora del Pilar on the eastern outskirts of Madrid, died inside the structure on November 28, 2021, at the age of 96. Frail by nature and ascetic through practice, in recent months he had been unable to climb the stairs to the cathedral’s soaring rooftop or lift heavy construction materials, and increasingly required help from his family and long-time assistants.

Born to a family of farmers in Mejorada del Campo, in the Community of Madrid, on September 20, 1925, Gallego entered a Roman Catholic monastery at the age of 27. There, he developed tuberculosis, which was exacerbated by his self-deprivation and the retreat’s austere accommodations, and because of the risk of contagion his presence posed to other members of the religious community, he was asked to leave prior to taking his final vows.

Having promised in prayer to devote himself to his religion were he to recover, Gallego laid the first stone for his cathedral on October 12, 1961 (the Virgin of Pilar’s saint’s day) in the middle of a field he had inherited from his parents. Plans for his massive undertaking existed only in his imagination.

Inspired by the great cathedrals and churches of Europe, as well as by such secular buildings as feudal castles, the White House, and even the Taj Mahal, Gallego railed against the aesthetics of contemporary religious architecture. In his own big project, he strove for a classicism based on harmony and proportion. He pinned photographs, postcards, and newspaper articles to the walls of the cathedral-in-progress to refer to as he developed a style that simultaneously eschewed angles, minimalism, and the baroque.

Early on, Gallego sold off some of the excess farmland surrounding his planned cathedral in order to fund his initial purchases of building materials, but after exhausting those supplies, he turned to foraging and collecting materials for which others had no use. He was proud of his repurposing efforts, noting, “I collect what others throw away. All of this would be garbage otherwise, of course.” He used what he had on hand and if he lacked a particular material or supply, he moved on to another part of the complex to work with what was available, modifying his plans and designs as necessary.

This working method resulted in a random and asymmetrical focus on distinct architectural or decorative components within different areas of his evolving cathedral complex. Yet he achieved stylistic consistency by creatively adapting and filtering his chosen visual vocabulary through the imperfections of the various donated and scrounged materials that he acquired for his project.

In time, the cathedral complex grew to encompass an entire city block, enclosing over 86,000 square feet of space and featuring domes measuring over 130 feet in height. In a 2005 Spanish architecture magazine, the British modern architect Norman Foster was quoted as having described Gallego’s cathedral as “the most extraordinary thing I have ever seen.”

Gallego’s reference sources and materials were diverse and sometimes incompatible; the result of such factors is a visually cacophonous design in which his cathedral’s soaring central nave, apse, high arcades, and stained-glass and rose windows speak to the Gothic; by contrast, the shape of its portal, with its unornamented archivolts, as well as its rotund cupolas and geometrically simple brick walls, are decidedly Romanesque. A great dome built on curvilinear triangles formed by arches recalls Renaissance architecture, while its flanking towers evoke the minarets of Al-Andalus, the Muslim-ruled Iberian Peninsula of the period from the early 8th through the late 15th centuries. And although Gallego dreamed of opening his cathedral to the pious masses, he also indicated that he wanted its exterior to resemble that of a fortress.

Working on the site for six decades, Gallego was everywhere at once, attending to miniscule details in the nave or baptistery, on the roof, or in the crypt or the cloisters. He proceeded in an almost counter-intuitive way that seemed to impede the completion of construction, starting many different components of his grand design but never completing any of them. While he spent his life attempting to reach his ambitious creative goal, in the end it seemed that his accomplishment had more to do with the process of executing his project than it did with bringing it to completion.

In fact, he acknowledged several times that finishing it would have been almost too much for him to have accepted, as such success might have filled him with what devout Roman Catholics like himself would have regarded as impious pride.

Justo Gallego hoped that, after his death, others would continue working on his project and that, ultimately, his cathedral would be used for its intended purpose. However, for many decades, the local Roman Catholic diocese in which the site is located refused the self-taught architect’s gift of his grand building, with its bishopric describing it as a “poisoned present.” Municipal authorities even speculated that, after his death, they might raze the entire structure, given the fact that Gallego had never obtained the necessary permits and clearances that would have allowed him to legally undertake the project and that would have certified its stability.

Finally, in May, 2021, his offer was accepted by the Madrid-based, nongovernmental charitable organization Messengers of Peace, which plans to work with engineering and architectural teams to address the still incomplete cathedral’s building-stability issues and to finish the project. In addition, Mejorada del Campo’s government has at long last recognized the importance of Gallego’s creation not only for local residents but also for tens of thousands of annual visitors. It has submitted a petition to Spain’s central government to honor Gallego’s cathedral with a national cultural-heritage designation.

Portions of this text were drawn from the chapter on Justo Gallego Martínez in Jo Farb Hernández’s book Singular Spaces: From the Eccentric to the Extraordinary in Spanish Art Environments (2013).
©2021 Jo Farb Hernández