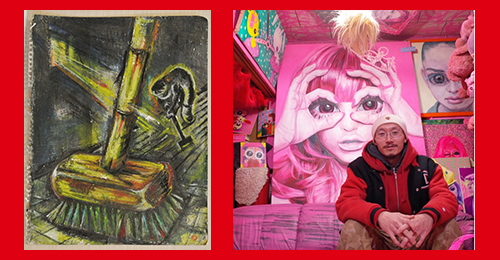 In Japan, the private art dealer and researcher of outsider art Nobumasa Kushino has promoted the drawings of Gataro (left) and the art environment of Shūhei Tsuji (right). Photos from the website of Kushino Terrace
NOBUMASA KUSHINO’S INTRIGUING JAPANESE ART BRUT DISCOVERIES

Born in 1976, Nobumasa Kushino currently lives and works in Shizuka Prefecture, in southeastern Japan. Since 2000, in addition to his work on the staff of a social-welfare organization serving people with intellectual disabilities, he pursued various art-promoting activities, and beginning in 2012, as a curator, he was associated with the Tomonotsu Museum in Fukuyama, in Hiroshima Prefecture.

Thereafter, in order to promote certain deserving forms of expression that were not already well known, in 2016, he founded the gallery Kushino Terrace in Fukuyama. To date, he has done original research about more than 400 artists, and not only those who are disabled, introducing them through projects that have been presented throughout Japan’s art scene and in other settings.

His books include, among others, Autosaido de ikite iru (Living on the Outside, Taba Books, 2017) and Autosaido Japan: Nihon no Autosaidaa aato (Outside Japan: Japanese Outsider Art, East Press, 2018).