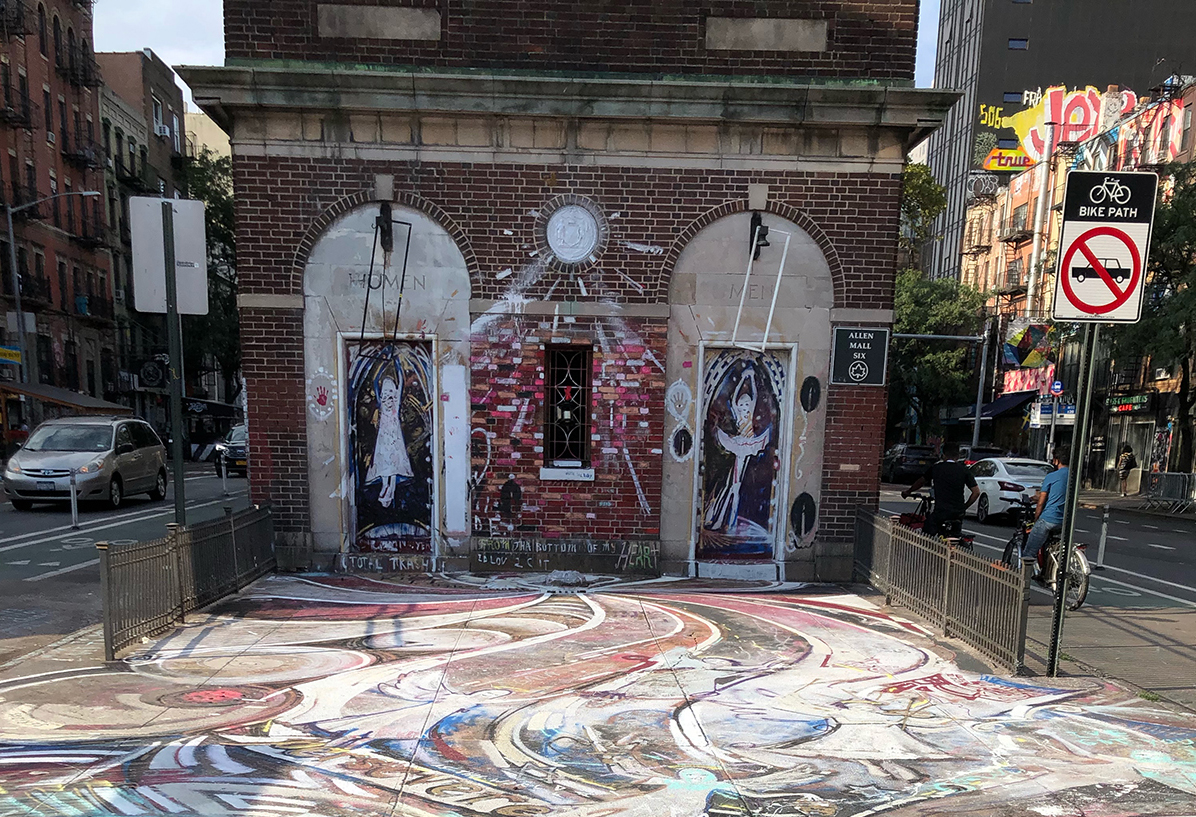 Late this summer, a transgender, apparently homeless artist named Nadja Rose began painting the broad sidewalk and the exterior walls of a city-owned utility building in the median strip at the intersection of Allen Street and Delancey Street, in downtown Manhattan. All photos in this article by Jon Waldo
NEW YORK CITY STREET ARTIST: ART & CONTROVERSY

THE STREET AS ART GALLERY

For many years, the painter Jon Waldo, who has worked as a carpenter and contractor to support his art-making, has lived with his family and kept a studio in an old building on Allen Street, an avenue in downtown Manhattan, in the Lower East Side district, near Chinatown. He has watched, not always approvingly, as large parts of his neighborhood, which, historically, had long been a home for waves of immigrants and their family-run small businesses, has become gentrified.

Small shops closed, rents shot up, and young urban professionals with money to throw around at new, noisy bars and nightspots poured into the area, along with art galleries and boutiques selling high-priced T-shirts and skateboards. A tea shop co-founded by the electronic rocker Moby opened in the area, on Rivington Street. (It’s now closed.) The neighborhood’s hipness quotient shot through the roof.

[To see a complete portfolio of photos of Nadja Rose’s street-art installation, click on any photo in this article’s text box. An image gallery will pop up on your screen. Click through it to see Jon Waldo’s photo essay.]

One afternoon this past summer, while walking through the area back to his home, Waldo spotted paintings on the sidewalk and on the exterior walls of a city-owned, red-brick utility building located on the median — or, technically, in the space in the middle of Allen Street known as the “Allen Malls.” Asking around among his friends and neighbors, he learned that the street art had been produced by an apparently homeless artist named Nadja Rose.

Waldo snapped photos of the impromptu art installation as it evolved over several weeks and shared some of his first pictures with the Lo-Down, an online community newspaper. It published a short item, illustrated with a few of Waldo’s photos, about Rose’s public presentation, which city officials appeared to regard as vandalism, and many a local resident seemed to accept or ignore, with a shrug, in a typically New York, live-and-let-live way. After all, this summer, with their dilapidated subway system and rising crime rate, and in the face of ongoing pandemic dangers, most New Yorkers had other, more urgent concerns on their minds.

“I walk by that median strip in Allen Street every workday morning and evening on my way to or back from the subway. One day, I saw an accumulation of junk, which reminded me of the little flea markets that have been set up in the past in that same space. Then someone started painting the sidewalk there.”

“On another morning, I went out and saw paintings on found wooden panels that had been set up, too. They blew me away. For me, this was the first real art I had seen in a long time. The artist who was creating this expanding art installation could sometimes be seen in the morning, sleeping on the ground. One evening, I was able to speak with her. I found Nadja Rose to be sweet — and strong.”

“Another handwritten panel said: ‘For those of you who think my lack of sales or participation in the commercial art gallery system is somehow indicative of a lack of success LOL fuck you.’”

“As an artist, I think that Nadja Rose is the real deal.”

“I thought her painting on a door of the red-brick utility building of a woman holding a violin was beautiful. This artist’s works seemed to come from a very real place — from an urgent need to make them, to make something beautiful. From a basic need to create.”

“Fast-forward: By late September, city officials had begun setting up a fence around the median space, apparently to prevent anyone from occupying it — and effectively locking Nadja Rose out. The state was flexing its muscles. So sad. Some people, some artists, are so vulnerable.”