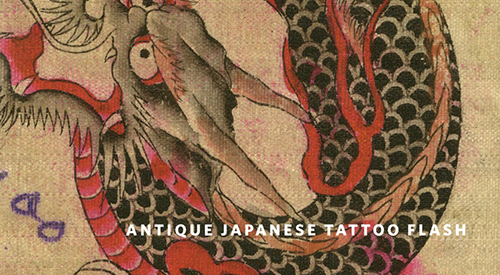 A YOUNG, TEXAS-BASED TATTOOER DISCOVERS AN INSPIRING ANTIQUE, FILLED WITH COLOR AND INSPIRATION

The 25-year-old tattooer Nick York, who calls himself "professor," lives and works in Denton, a city in the north of Texas, where the University of Texas has a large campus, with facilities serving some 41,000 students. York does not work at the big school, but he does have a tattoo shop in Denton. He uses his title both a bit ironically and also with a sense of pride reflecting his interest in and appreciation for many aspects of tattooing and the tattooer's art, including their long history.

In a recent interview, York noted, "I’m not a real professor. It’s a title some tattoo artists gave themselves in the early 1900s to help give them an edge up on their competition by making it seem that they were more knowledgeable about tattooing. So the title 'professor' is a call back to that tradition. If you were a tattoo artist in the period from, say, 1890 to 1930, and you didn’t go by 'professor,' you were not considered worth your salt."