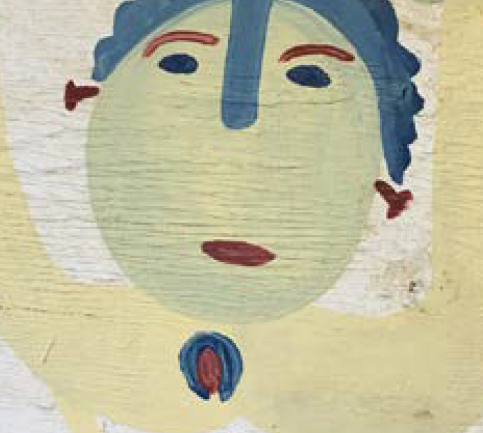 IN THE FRAME: A Tribute To Mose Tolliver

A collector of the American outsider artist’s bold, iconic paintings celebrates their originality and quirky charm.

The well-known, New York-based photographer Bill Westmoreland was born and brought up in Arkansas and spent a formative, early period of his career in Houston, Texas. Westmoreland’s work includes extensive image-making in the related fields of fashion and beauty; today, he is best known for his vivid photo-portraits of artists, jazz musicians, and Broadway stars, as well as for his fine-art photographs inspired by the theme of the horizon line.

In the 1980s, Westmoreland’s sister and her husband at that time, Dr. Richard Portis, set off from their home in Arkansas, to make routine road trips through the American South. They stopped in small towns and met self-taught artists who made familiar forms of folk art as well as those whose more unusual, deeply personal creations were becoming known as “outsider art.” They purchased works of art directly from such artists as Howard Finster, Floyd Clark, and Mose Tolliver. (In 1984, MD Magazine, a publication for doctors, published Richard Portis’s account of his encounters with Tolliver in an article titled “An Unlikely Black Picasso.” A link to a .pdf file containing that complete, published article appears here, below.)

In Alabama, they met Tolliver (1919-2006), a former furniture-factory employee who painted with house paint on plywood, Masonite panels, or pieces of furniture. Having been seriously injured in a factory accident, Tolliver found it difficult to stand without the use of support crutches. As a result, he sat on the edge of his bed to paint, perching his boards on his knees.

Today, Westmoreland and his sister share ownership of a collection of more than 40 Tolliver pictures that date from that era, several decades ago. (Among informed collectors of Tolliver’s work, that period produced the artist’s most desirable paintings.)

“My sister loved the unconventional subject matter in Mose’s paintings, as well as the fact that none of the paintings had been made on canvas,” Westmoreland says.

The photographer adds, “What impresses me about Tolliver’s work is that he became one of the art world’s well-known artists — but he painted with ordinary house paint.” Today, SHRINE, a gallery in New York, exclusively represents the Westmoreland Collection and is bringing works from its holdings to market.

Westmoreland, who serves as brutjournal’s visual director and has created numerous short videos for the magazine’s Instagram account (@brutjournal), has created a short video celebrating Tolliver’s bold palette and his paintings’ peculiar depictions of animals and human bodies (of the kind you’re not going to find in any anatomy books).

It’s our pleasure to share Westmoreland’s tribute to Tolliver here.

Entry about Mose Tolliver from the website of the Atlanta-based Souls Grown Deep Foundation
https://www.soulsgrowndeep.org/artist/mose-tolliver