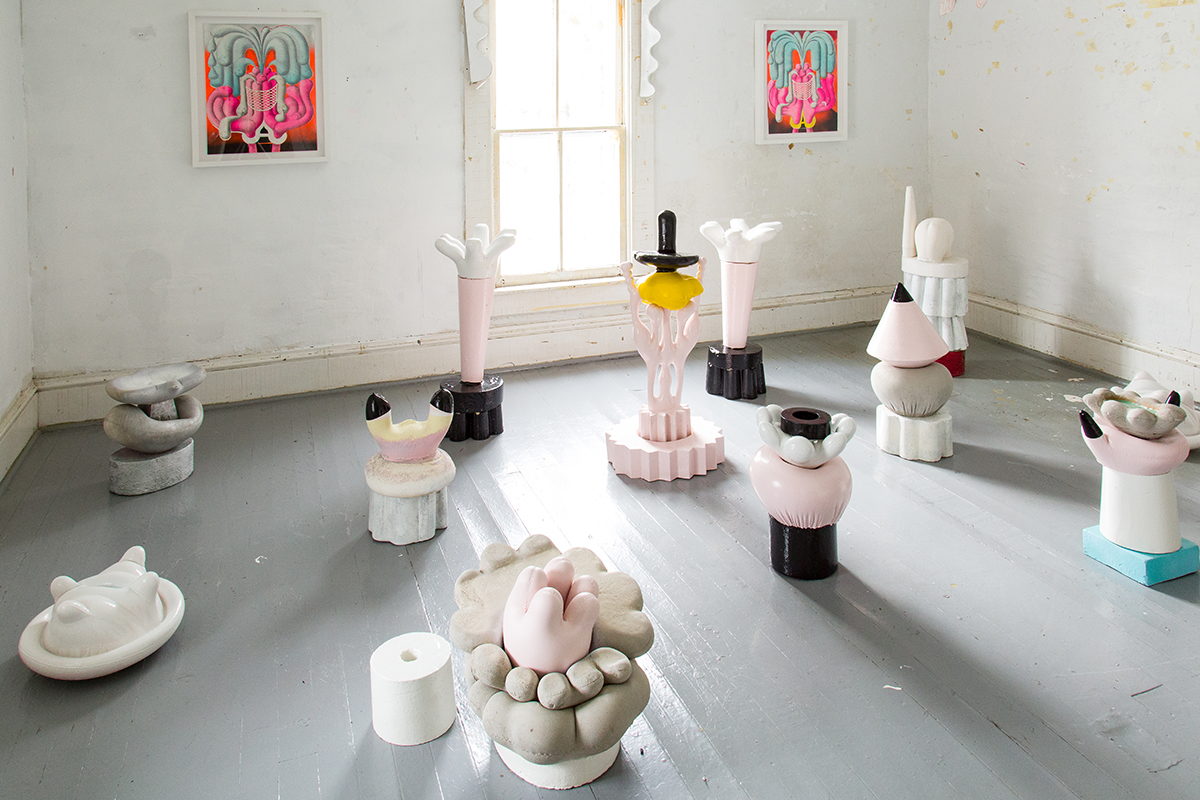 Late last year, at the height of a virus-lockdown period, the artist Mike Goodlett mounted an exhibition inside his home in rural Kentucky. It was photographed and presented as an online solo show by March Gallery, a new, New York-based venue founded by the independent curator Phillip March Jones. In fact, Goodlett always lived with his art filling the rooms of his big, old house, in which he resided alone. All photos of artworks in this article by Alan Rideout, courtesy of March Gallery
MIKE GOODLET, ARTIST (1958-2021)

DESIRE AND HUMOR IN THE WORK OF A KENTUCKY RECLUSE

The artist Mike Goodlett died on June 30, 2021 at his home in rural Wilmore, Kentucky. He was 63 years old.

Goodlett, who was born in Lexington, Kentucky, in 1958, was a reclusive, private person. The locus of his art-making and daily life was a seven-room, old country house in the central part of his native state in which his grandparents had once resided. For many years until his death, he lived there alone. Ever since he first moved in, back when he was 30 years old and well after having earned an undergraduate degree at the Art Academy of Cincinnati, it had served as his home, studio, laboratory, and refuge.

Late last year, it also functioned as the backdrop for an online presentation by the New York-based March Gallery of Chez lui, a solo exhibition of the artist’s sculptures and drawings.

Goodlett’s exhibition, which ran for a few months, consisted of atmospheric photographs of his artworks as they had been installed for display in and around his house. The old building was located on a five-acre property that ended abruptly on one side in a steep cliff.

“My house functions as a big sketchbook in which I’m free to work out ideas in space, without restrictions,” Goodlett told me during a video-call interview late last year, just as his exhibition was being launched online. He added, “It’s a whole world here for me. I make and display art in every room and I interact with it.” During all the years that he occupied the house, he never set out to prettify the old structure in the soulless way that is the stuff of interior-decorating magazines. Instead, he left yellowing wallpaper to fade and peel. When forced to fill in cracks in aging wall or ceiling plaster, he integrated flower-like sculptures made of cut and shaped paper into his tidy repair jobs.

To make his sculptures, Goodlett devised a technique in which he poured a liquid mixture of regular cement and Hydro-Stone, a gypsum cement used to produce dies and castings with hard surfaces, into fabric forms he created himself using four-way stretch material (the same kind that is found in athletes’ body-hugging garments).

“When the plaster is being poured into the fabric, I can watch it literally find its form, because it’s going to do what it wants to do,” the artist told me. Over time, he explained, he had learned how to control an emerging shape but often he preferred to let his process unfold on its own.

When I spoke with him, Goodlett recalled, “In art school, I studied drawing, painting, and lithography, and I’ve always liked the way in which Andy Warhol, when making silk-screen paintings, allowed splotches of ink that appeared while pushing it through a screen to remain on a canvas and become part of a finished work. I also incorporate accidents that occur as I’m making my sculptures. Later, they’re not really visible to viewers.” Remarkably, given the unwieldiness of his materials, Goodlett worked alone. “I could use an assistant but I’ve always done everything myself,” he said.

Goodlett used ballpoint-pen ink and thread, which he stitched directly into his paper, to create drawings of abstract, biomorphic forms. To make the newer drawings that were on view in Chez lui, he also used spray paint and stencils he had produced himself.

Goodlett told me that, like many gay boys who had grown up in places that are socially very conservative, although he knew from an early age that he was different from other children, instinctively he understood that, for his safety, he could not reveal his true nature. Like many youngsters in similar, soul-crushing circumstances, he found emotional-psychological relief — and a soothing escape — in art. Throughout his childhood, he made drawings.

“Some clearly were inspired by suicidal thoughts,” he told me wistfully, aware that, long ago, he had left the past behind and moved on. As soon as he learned that there was an art school in Cincinnati, he recalled, “I knew that, one day, I’d find myself studying there.”

Alluring tensions can be felt in Goodlett’s sculptures between their formal elegance and their air of subversive, brimming-over lustfulness. He pointed out that he found inspiration in the Chicago Imagists’ paintings, Tom of Finland’s homoerotic pictures, and old underground comics. However, with unwitting nods to the sensuously biomorphic blobs or abstracted subjects in the work of such modern-art innovators as Constantin Brâncuși, Jean Arp, or Louise Bourgeois, in their own way, Goodlett’s creations are also grounded in modernism’s fascination with the expressive power of pure form. In them, in a match-up between Discipline and Eros, sexiness and sexuality always win. In his art, their expression is unabashedly, wittily gay.

When we spoke in late 2020, Goodlett told me that, in the sketching-out of ideas for new drawings and sculptures he had been doing around that time, he was beginning to sense that his work might be moving on from its preoccupation with romping, randy forms.

“Whatever comes next,” he observed at that time, referring to his old house, “I’m sure that this place will play a role in my creative process and allow me to work things out in a natural way, wherever that process might lead.”

As though he were describing an old friend, he added, “It always does.”

Website of Institute 193, in Lexington, Kentucky, a non-profit arts center founded by the independent curator and March Gallery director Phillip March Jones, with which the artist Mike Goodlett was closely associated; he showed his work there on several occasions:
https://www.institute193.org/

Institute 193 has just opened Mike Goodlett: Desire Itself, a commemorative exhibition, which will remain on view through September 25, 2021:
https://www.institute193.org/exhibitions-mikegoodlett