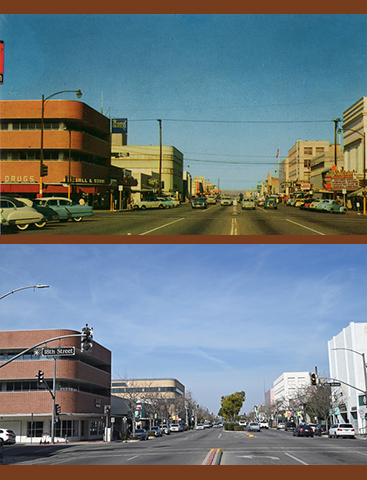 Merle Porter (1907-1988) was a photographer and manufacturer of postcards who traveled by car throughout the American West, shooting photos of the land, monuments, and sometimes the most ordinary, unassuming buildings. His Royal Pictures brand sold millions of picture postcards. Sarah Fensom, brutjournal’s Los Angeles-based U.S.A. West Coast bureau chief, takes a look at an exhibition of Porter’s photo cards, which together constitute a unique artistic-scientific-historical document.
MERLE PORTER’S ROYAL PICTURES POSTCARDS: THE BEAUTIFUL AND THE BANAL IN THE AMERICAN WEST

BAKERSFIELD, CALIFORNIA — For over fifty years, Merle Porter (1907-1988) produced and distributed millions of postcards. His company, Royal Pictures, was based in Colton, a small city in San Bernardino County in the Inland Empire region of California, in the southeastern part of the state. But Porter, who ran Royal Pictures as a one-man operation (his wife Bessie sometimes helped him), was on the road for nine months each year, logging thousands of miles in a Ford Econoline van that included small living quarters and space for his equipment and the stock of cards he set out to sell.

Traveling around the western United States, Porter shot hundreds of urban and landscape views in color with a 4 x 5 Graflex Speed Graphic camera (the negatives it produced each measured four by five inches).

Porter’s route circled the California, Arizona, and Nevada desert in the winter and California’s beach towns during the summer but largely avoided such major, recognizable cities as San Francisco and Los Angeles. During his travels, he distributed postcards to such retail outlets as souvenir shops, gas stations, and motels. At his business’s apex, roughly one million of Porter’s postcards were in circulation in the U.S. each year. Thanks to that kind of success, he became known as “the postcard king of the West.”

The geographic and thematic scope of Porter’s photographic work is staggering. In cataloguing the visible environment of so much of California and its neighboring states — historical sites, landmarks, monuments, highways, human-made infrastructure, architecture — he created an immense archive documenting the region’s past and evolving present. However, unlike more self-consciously stylized commemorative imagery, which can be crafted to favor or highlight what is considered beautiful or historically significant, many of Porter’s postcard subjects were truly commonplace; in fact, they were almost shockingly mundane.

Among them: a parking lot in Carmel, a dirt road and a few storefronts in Bodie, cars parked along a main drag in Hollister, and a drugstore in Palmdale. These are just some of the views that adorned Porter’s mid-20th-century and postwar-era postcards. Describing them briefly on their reverse sides, Porter printed bits of information and local history, like, for example, a few words about a particular town’s past in mining or gold panning. He often cited the costs of the subjects his postcard photos depicted ($8000 for the first warf in Monterey, California) or mentioned the names of a place’s local criminals (“The Bad Men from Bodie”).

After the Center for Land Use Interpretation, a nonprofit research and educational organization based in Culver City, California, focusing on how humans interact with and interpret the landscape, opened in 1994, it began amassing a collection of postcards. The CLUI happily collected Porter’s cards, even if it wasn’t initially aware of their maker’s interesting story as an itinerant photographer and businessman.

In a recent telephone interview, Aurora James, the CLUI’s program manager, told brutjournal: “In the late 1990s, Sabrina Merlo called the CLUI and asked us to look at our collection of postcards. She asked, ‘Do they say “Merle Porter Royal Pictures” on the back? Because I just noticed all of my favorite postcards are by the same person.’” In fact, Merlo, a curator who was involved with the CLUI at the time, was on to something, for, as it turned out, the majority of the postcards in the organization’s collection did indeed bear the Royal Pictures brand name.

In 1999, Merlo curated a CLUI exhibition featuring hundreds of Porter’s postcards. The organization displayed them on its walls and in donated postcard racks, and showed some film footage that Porter had shot in conjunction with the still photographs he produced for his cards. By that time, Porter had been deceased for about a decade, but his widow, Bessie, and other family members saw that exhibition, on the occasion of which the CLUI made some 20,000 old Royal Pictures postcards available for sale.

That initial exhibition began a long relationship between CLUI and the late photographer’s vast, printed oeuvre, leading to the organization’s second Porter-postcards exhibition in 2014. However, as James points out, the CLUI does not officially represent Porter’s estate. “We just sell the postcards and have [been doing so] since 1999,” she said. A ten-pack of Royal Pictures postcards can be purchased on the CLUI’s website for $10.00.

It’s easy to regard Porter’s photographic output as an artistic practice. His work, both in the way it constitutes an informal archive and in the banality of its imagery, brings to mind the California-based artist Ed Ruscha’s seminal conceptual photography books of the 1960s. Such Ruscha volumes as Twentysix Gasoline Stations (1963), Some Los Angeles Apartments (1965), Every Building on the Sunset Strip (1966), and Thirtyfour Parking Lots (1967) all served as catalogs of L.A.’s functional architecture of that period.

Looking back at those books, the dispassionate, documentary style of the photographs they contain, which contrasts dramatically with the grandeur of Hollywood depictions of the West, seems to strike a chord similar to that of Porter’s photography of the most unassuming subjects, even if Ruscha’s aesthetic intentions were far different from those of the prolific postcard-maker.

James observed that Porter’s family members were not interested in seeing the late photographer’s body of work “framed through [the aesthetic-intellectual concerns of] a cultural institution” but instead regarded what he had been engaged in for so many years “as a business.” As a result, she added, the Center for Land Use Interpretation “bought the cards from them for the same rate a gas station would [have purchased them].”

Nevertheless, when it comes to their subject matter, many of the vistas Porter captured on film were and continue to be very much of interest to the kind of research the CLUI pursues. James said, “We’re interested in places, the built environment, the small towns — not the anonymous sand dunes.” She noted that the CLUI continued buying Porter’s postcards from his family’s remaining stock until the early 2010s, when Bessie Porter died.

This spring, the CLUI has mounted two exhibitions at the Todd Madigan Gallery on the campus of California State University in Bakersfield, Time Stamps: Revisiting California Through the Postcards of Merle Porter and Fourteen Views of Bakersfield. (Both of these presentations will remain on view through May 7.)

Time Stamps: Revisiting California Through the Postcards of Merle Porter features a selection of the photographer’s postcards culled from the CLUI’s collection and accompanied by new photos of the same vistas they depict that have been shot more recently by CLUI associates. Assembledby James herself, Fourteen Views of Bakersfield features postcard views of the city of Bakersfield captured by a group of fourteen young contemporary artists who might have been influenced by Porter’s work; each of them selected, mapped, photographed, and described twelve places of local or personal significance of his or her own choosing.

As James made clear, Porter was someone who approached his work with the mentality of an American businessman, not that of an artist. Still, in his attempt to make a buck and pack the display racks of what was once a popular mode of communication with countless postcard options, he inadvertently documented for posterity countless places and spaces in which the everyday life of his era was being lived. In Porter’s Amercan West, any view was worth a postcard.

Thanks to these two informative exhibitions, both Porter’s legacy as “the postcard king of the West” and, perhaps more importantly, a particular style of local photography have been given a boost and may endure. Time Stamps and Fourteen Views of Bakersfield serve as reminders that, today, as the natural environment and our human interaction with it continue to evolve — and, sadly, not always in the best of ways — it might be more vital than ever to shoot and, enthusiastically, to show, the beautifully banal kinds of photos Porter produced in such abundance.

Website page of the Todd Madigan Gallery on the campus of California State University in Bakersfield, with information about the exhibitions Time Stamps: Revisiting California Through the Postcards of Merle Porter and Fourteen Views of Bakersfield; both exhibitions on view through May 7, 2022. Click here.