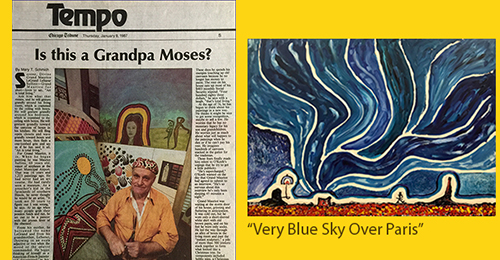 Maurice Sullins (1910–1995), who worked as an airplane waxer at the municipal airport in Joliet, Illinois, began making paintings in 1970, when he was 60 years old. An avid reader with a vivid imagination, he worked obsessively on his art, ultimately producing some 1200 paintings, many of which depict landscapes or refer to nature’s forces and the natural world. Sullins combined abstract passages and more realistic imagery in his compositions, giving them a special kind of aesthetic impact. Above, right: “Very Blue Sky Over Paris,” acrylic on canvas, 30 x 40 inches. Photos courtesy of Hana Pietri Gallery, Chicago
MAURICE SULLINS: FORCES OF SKY AND LAND, CAPTURED IN PAINT

THE VIBRANT WORK OF A LITTLE-KNOWN, SELF-TAUGHT ARTIST FROM ILLINOIS IS EMERGING — BOLD, INTENSE, AND PACKED WITH CREATIVE ENERGY

Sometimes, it seems, an artist’s creative vision may be bigger and more potent than anything the pictorial space of a painting or drawing can contain, or that conventional art-making materials and genres might allow him or her to express.

In the case of the self-taught artist Maurice Sullins (1910-1995), who only started producing art at the age of 60, both a sense of exuberance about making pictures and an unbridled creative urge appear to be as much the subjects of his large, diverse body of work as any of the mountains, trees, semi-abstract human figures, and stylized Eiffel Towers his boldly painted canvases depict.

Sullins, whose ancestors were French, lived in Joliet, Illinois, a city located about 30 miles southwest of Chicago, where he worked as a waxer and detailer of airplanes at a local airport. Apparently, on his own, mainly by looking at books, Sullins learned about a wide range of modern-art styles and approaches to painting, all of which he assimilated, interpreted in his own ways, and then poured into his work.