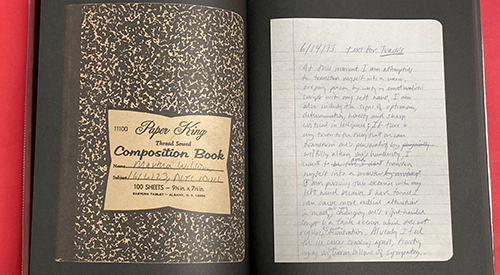 MARTHA WILSON’S EARLY YEARS: THE JOURNALS HAVE BEEN PUBLISHED

Now 73 years young, the American performance and visual artist, anti-censorship advocate, arts administrator, curator, and educator Martha Wilson, who founded the Franklin Furnace Archive, a pioneering, alternative-space arts center in New York, in 1976, is having what's known as a moment.

As brutjournal recently reported in its October 2021 issue, Wilson's work is now being showcased in the exhibition Political Performances and Carte Blanche to Martha Wilson at mfc-michèle didier, a contemporary-art gallery in Paris, where it will remain on view through January 8, 2022. This retrospective survey features documentation of the artist’s performance-art impersonations of the American first ladies Nancy Reagan and Barbara Bush, and of Tipper Gore, the ex-wife of former U.S. Vice President Al Gore. During their husbands’ periods in office, all of those politicians’ wives became involved in various aspects of the contemporary, highly politicized “culture wars” in the United States. Through her performances, Wilson took on their conservative positions using costume and disarming parody.