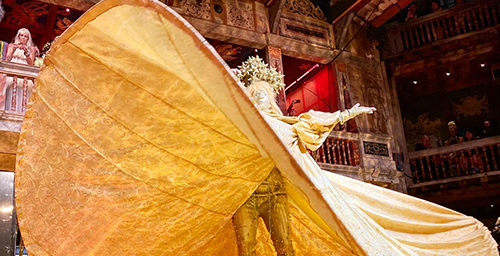 IN LATE OCTOBER, AN EXPLOSION OF OUTRAGEOUS FABULOUSNESS WAS JUST WHAT WE NEEDED

This year, at Halloween time, the new exhibition The Horror Show! A Tale of Twisted Britain opened at Somerset House, a cultural center known for innovative programming in central London. (See my separate article about it in this issue of brutjournal). The works of art in various genres and media that are on view in that remarkable exhibition span a period from the early 1970s until today.

Around the same time, the 50th-anniversary edition of the artist Andrew Logan’s Alternative Miss World pageant, which featured fab avant-garde art, costumes, and performances, took place at Shakespeare’s Globe, one of the most iconic theaters in London and, indeed, in all of England. Both The Horror Show! and Logan’s Alternative Miss World spectacle are cultural events that seem to have sprung from the darkness of today’s dispiriting news from just about everywhere into the light of unbridled artistry and liberated creativity.

Doing some research, I discovered that the Logan first presented his Alternative Miss World event on Downham Road, in East London, back in 1972. At that time, he had a studio — an old, converted jigsaw factory — in a Hackney Council property. Back then, that area was peppered with vacant, run-down buildings. It was depressed, a place of builders’ merchants and pubs known for their criminal clientele and lunchtime strippers, along with the occasional greasy-spoon café or betting shop. That was it. The neighborhood remained like that for many years, serving as a fertile breeding ground for creative types who might have been invisible but who were plotting and searching for ways to challenge establishment values.

In an article published in 2014 in the online magazine Civilian, Logan remembered a time when he was living on Downham Road and planning a party for friends, an event that had been inspired by his visit to the Crufts Dog Show, an annual event in the United Kingdom that dates back to 1891. As its Wikipedia entry notes, “[The Crufts Dog Show] consists of several competitions occurring at the same time. The main competition is for the Best in Show Award, which is hotly contested by dogs and their owners [from around] the world.” Crufts’ four-legged contestants are judged on such attributes as poise, personality, and originality.

In the Civilian article, Logan recalled, “It was 1972. Chaos ensued. I remember the anticipation. We had David Hockney judging, Jill from Ugly Agency [a London-based modeling agency featuring unconventional fashion models of all shapes, sizes, and looks] and Robert Medley [1905-1994; a British modern artist who was also a theater designer]. They were all crammed in a single corner.”

“I had been living above my sister-in-law’s hat shop, and wrote to every council in London asking if they had a studio I could move into. Hackney wrote back and offered me the space for £30 a month, which none of us could afford. Marc Balet, who went on to become art director at Andy Warhol’s Interview magazine, lived there for a while. The second Alternative Miss World, in 1973, was in the same place. The next one, in 1975, which Derek Jarman won as Miss Crèpe Suzette, was in my new studio in Butler’s Wharf on the Thames. [...] The culture has changed totally since we started putting on Alternative Miss World[;] there was no club culture back in 1972. There was no leisure culture at all. It was just work and the pub.”

Artists who later emerged as radical style changers in fashion, art, music, and the theater attended the earliest editions of Alternative Miss World, which, in retrospect, must have been something of a primordial soup of artistic inspiration in many different, overlapping fields.

Alternative Miss World was an outlet for artistic alchemy and a crucible of creativity; cultural historians and critics still have not fully recognized its role as an event that nourished and helped nurture the counterculture in Britain, along with the club scene and cutting-edge fashion (some examples of which are on view in the exhibition The Horror Show!).

Logan’s baby has come a long way since its inception in the once run-down, dismal precincts of East End Hackney, for this year’s Alternative Miss World took place at Shakespeare’s Globe, the historic theater in London located in the cultural zone on the south bank of the Thames. The atmosphere and the crowd at this year’s event were sizzling; inspired by its 50th-annversary theme — gold — spectators came dressed in their festive-outlandish best.

Logan’s own host/hostess outfit, which was derived from something he had found years ago in a jumble sale, was based on an old, British variety-show costume; split down the middle, one side was a man’s garment, while the other was meant to be a woman’s.

Logan is an artist who inspires joy. For decades, through his work and events like Alternative Miss World, he has promoted the spirit of unity, equality, and inclusiveness with regard to age, sex, disability and nationality. As a result, anyone can enter his Alternative Miss World pageant, which takes place every four to five years, given that each edition of the big event requires so much planning and preparation. Its own website describes the show as a “celebration of transformation, creativity and beauty that goes beyond gender, age, race and sexuality.”

This year, Shakespeare’s Globe, a theater in the round, provided a perfect setting for the over-the-top extravaganza. “A Midsummer Night’s Dream” performed by actors high on magic mushrooms came to mind; the unfolding spectacle felt psychedelic and blissful.

Logan, dressed in his own golden splendor, entered the theater to cheering crowds; he was delivered on a sleigh borne by a group of attendants who were barely dressed — in gold, of course. Presiding over the spectacle like a magnificent, hybrid Oberon-Titania, Logan welcomed a kaleidoscopic assortment of contestants offering an ever-morphing outpouring of feel-good, gaudy-gold bling — and the audience, loving it all, clamored for more.

There were the Neo-Naturists as Miss Golden Thread Bare, who stepped out onto the stage while “Jerusalem,” Sir Hubert Parry’s hymn adaptation of William Blake’s 1804 poem, filled the air. Carrying a large, roughly painted banner filled with Blakean symbols and “dressed” only in body paint, the performers let loose triumphant-sounding liberation cries as they struck poses with bows made of bent willow and wheat. They howled and they bellowed. They were spirits from Blake’s rich imagination. They were mischievous tree nymphs from a magical garden in “A Midsummer Night’s Dream.”

Memo to those who may be planning a trip to London late next year: The Neo-Naturists will be taking part in Women in Revolt! an exhibition opening at Tate Britain on November 8, 2023. It will feature the work of more than 100 female artists who were working in Britain during the 1970s and 1980s, often outside the mainstream art-and-culture scene.

This year, Logan’s celebratory Alternative Miss World again demonstrated how one man with a vision can become an ambassador of the spirit of equality, powerfully promoting the dream — and the worthy ideal — of a better, alternative, possible world in which all of the human family can live in harmony and peace — fabulously well decked out, of course.

My friends and I left the event feeling as though we had been basked in a tide of love, optimism, and all-around goodwill. As cultural events go, with this year’s Alternative Miss World, Logan and his creative collaborators cast some kind of very powerful spell. What a gift with which to have left the theater!