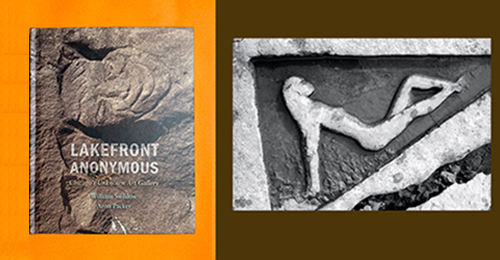 In their new book, Lakefront Anonymous: Chicago’s Unknown Art Gallery (published in hardcover format by www.InterestingIdeas.com), William Swislow and Aron Packer document some of the thousands of carvings that have been created by anonymous mark-makers over the years in the big blocks of quarried stone that serve as barriers and separate public parkland in Chicago from the shores of Lake Michigan. Above, right: A photo from the book by Aron Packer, from its “Bathing Beauties” chapter.
LAKEFRONT ANONYMOUS: CHICAGO’S MOST MYSTERIOUS VERNACULAR ART

Available online for customers in the U.S.A. from the publisher’s website, here.

Available online for customers based outside the U.S.A. from eBay. Click here.

Sometimes, the most intriguing secrets are easily accessible or clearly visible in plain sight.

So it is with the thousands of carvings that have been made over nearly a century on large, quarried stones that line the shore of Lake Michigan for many miles where that large body of water marks the eastern border of the city of Chicago. Now, with Lakefront Anonymous: Chicago’s Unknown Art Gallery, a book both history buffs and admirers of all forms of vernacular or hard-to-classify art will savor, William ("Bill") Swislow and Aron Packer have documented these curious marks — outlines of feet and hands, a pair of dice, a hot-air balloon, a heart pierced by an arrow (“Al loves Clara, 1967”), and many more.

Each one declares, anonymously and for the ages, “You’ll never know me, but, one day, I was here.”

Both Swislow and Packer are known in the community of collectors, historians, and aficionados in the United States who specialize in outsider art and various forms of vernacular art and design. In the past, for various books and magazines, each of them has produced photo-illustrated writings based on their respective research interests.