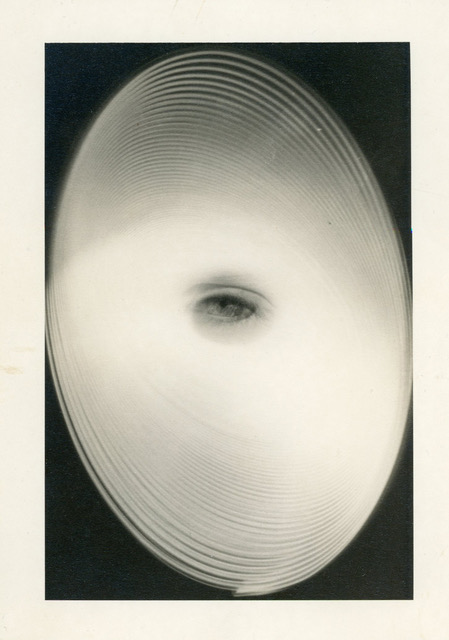 WE FEAST OUR EYES ON FOUR REMARKABLE ARTWORKS

Over the years, the graphic designer John Foster and his late wife, Teenuh Foster, of St. Louis, Missouri, assembled notable collections of outsider art, folk art, and vernacular photography. Through a lively Instagram account (look for “@accidentalmystery”), John routinely shares photos and descriptions of favorite pieces from his holdings, as well as wide-ranging observations about art, connoisseurship, and aesthetics. Here, in honor of this issue’s “Eyes on October” theme, he shares four gems from his trove with brutjournal.

About the photo that appears above this article’s headlines: Several months ago, a good friend of mine gifted me this anonymous photograph. I find this image, whose date is unknown, to be another example of how the allure or the influence of Surrealism never seems to die. This darkroom-manipulated image of an eye floating inside a spinning, time-travel-like vortex is stunning. As for its age, based on my experience as a collector of a wide range of anonymous images in the so-called vernacular photography category, my best guess is that this picture was created in the late 1960s or the early 1970s

Above: Johnson Weree was born in 1970, in Liberia, during a period of civil war. Originally, when he first started making art, he used such found materials as battery fluid and scrap wood. Later, he relocated to the Netherlands, where he continues to live and work today, although he is currently homeless and uses a public library as a refuge and a workspace in which to produce his drawings. Eyes are a prominent motif in Weree’s work, and in most of his portraits, a strange glow can be seen emanating from the brow area between the eyes of his subjects, as though it were coming from a mysterious third eye.

Above: In 1970, Inez Nathaniel Walker (1911-1990) was incarcerated in the Bedford Hills Correctional Facility for Women, in Bedford Hills, New York, northeast of New York City. It is the largest women’s prison in the state of New York. Walker was sent to there after having been convicted of criminally negligent homicide of a man who, she said, had mistreated her.

Later, in interviews, Walker revealed that, in prison, she made drawings as a means of protecting herself from “all those bad girls” — the other female inmates by whom she was surrounded. The eyes of her subjects, whom she normally depicted in profile, always looked forward. Her subjects’ hairstyles were quite detailed, and their oddly proportioned bodies usually featured small hands.

Above: For me as a collector, there is something about eBay that gives me hope that great finds may pop up from time to time. All I have to do is think about the hundreds of thousands of objects that are posted on that website each week to bolster my belief that surely something exceptional will be sure to turn up there.

I believe that, at times, eBay can feel like the Wild, Wild West — you just have to ride through many of its vast pastures in order to get anywhere. Over the years, I’ve discovered astonishing objects of great value there, as well as, sometimes, inexpensive items that make me pause and simply say, “Yes! This works for me.”

Take, for example, this anonymous image from the 1930s, which was drawn right on top of a photographic portrait of a woman. Its mystery and Surrealist-flavored intervention make this small object one of my favorites in my entire collection.

This kind of exquisite eye candy will bring tears of delight to your eyes.