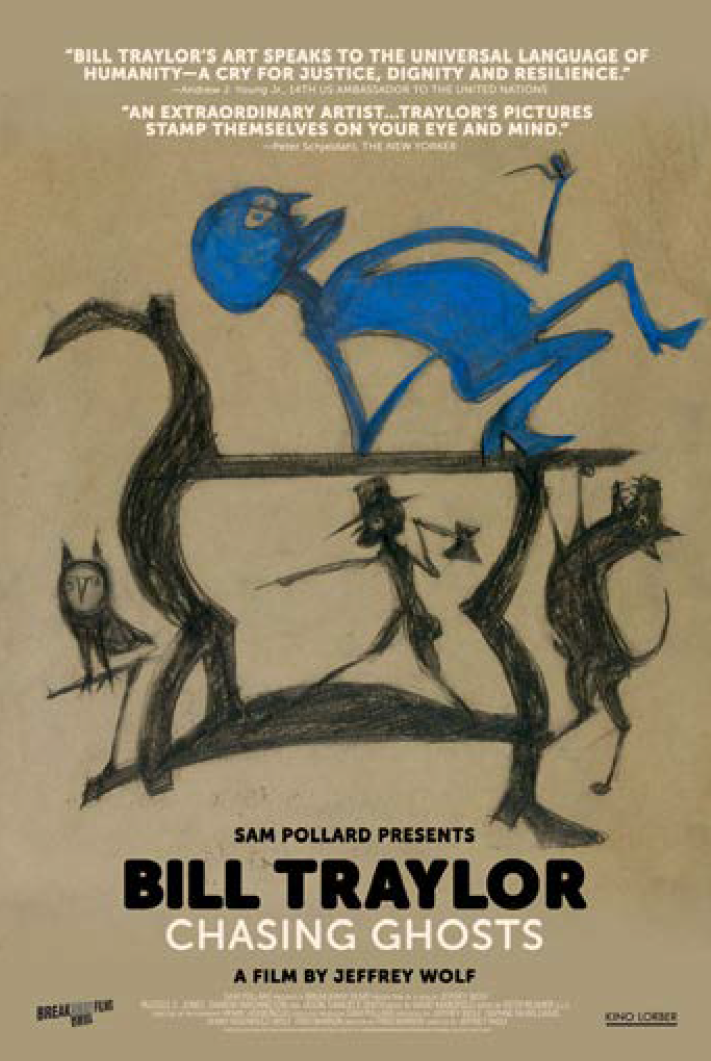 Successfully telling the story of an artist and the evolution of his or her work on screen is one thing, but capturing their spirit and substance in a wholly different medium is quite another. Such films as Peter Watkins’ Edvard Munch (1974) and Alain Rensais and Robert Hessens’ Guernica (1950) set high standards for such a task, taking bold formal risks and reaping substantial artistic and emotional rewards. Jeffrey Wolf’s new documentary, Bill Traylor: Chasing Ghosts, does an admirable job of placing the idiosyncratic drawings and paintings of its subject, an iconic, American outsider artist, in a broader socio-historical context, but like Watkins’ and Rensais and Hessens’ unconventional studies, Wolf’s film is at its best when it brings Traylor’s unique creations to life for viewers in novel ways.

Traylor, who was born in Alabama around 1853, toward the end of the slavery era, began making drawings and paintings in 1939, when he was in his mid-eighties and living on the streets of Montgomery. By the time of his death, in 1949, he had produced more than 1000 works reflecting both his own life experiences and a unique moment of transition for African Americans at the turn of the 19th and 20th centuries. Wolf’s film uses the rhythms of dance and African American prose (some evocative passages from Zora Neale Hurston) to give life to Taylor’s twisting, ghostly figures.

Live actors’ recitations, narrations, and performances, plus the use of animation, help create a lively mosaic vision of Traylor’s life and work, while Wolf’s stylized lighting of his interviewees — among them, the Duke University art historian Richard J. Powell and some of Traylor’s living descendants — helps lift the atmosphere of his film out of the aesthetic doldrums that characterize many a documentary’s clips of obligatory talking heads.

In inspired fashion, Wolf lights one of his interview subjects in a wash of cool blue and films a tap dancer in stark silhouette. The fluidity and variety of techniques he utilizes helps counterbalance some of the film’s more conventional formal tropes; meanwhile, in its actor-performed readings, various forms of address help evoke a sense of historical continuum in African American art’s development, flowing from before Traylor’s time through the “Black Cinema” movement of the 1990s and into the present.

Over the past decade or so, numerous art documentaries have struggled to establish distinctive formal identities while still describing and communicating their subjects’ respective visions; consider, for example, the fairly conventional screen treatments of the radical work of such artists as Chris Burden (Timothy Marrinan and Richard Dewey’s Burden, 2017) or Eva Hesse (Marcie Begleiter’s Eva Hesse, 2016). Sometimes, when such documentaries attempt to convey the spirit of an artist’s life and work, entertain with determination, and also inform the uninitiated, what emerges are works of anxious, cluttered distraction.

Bill Traylor: Chasing Ghosts avoids such a trap by employing genuinely inventive techniques. Ironically, however, its contemporary footage of Traylor’s great-grandchildren, with their admiring remembrances of and revelations about their ancestor rendered in simple, direct documentary style, turns out to be one of this film’s most powerful elements.

Wolf’s documentary gracefully balances the experimental and the tried and true, imaginatively wrestling with the constraints of its genre to create an informative, cinematic document that is also an engaging, entertaining film.