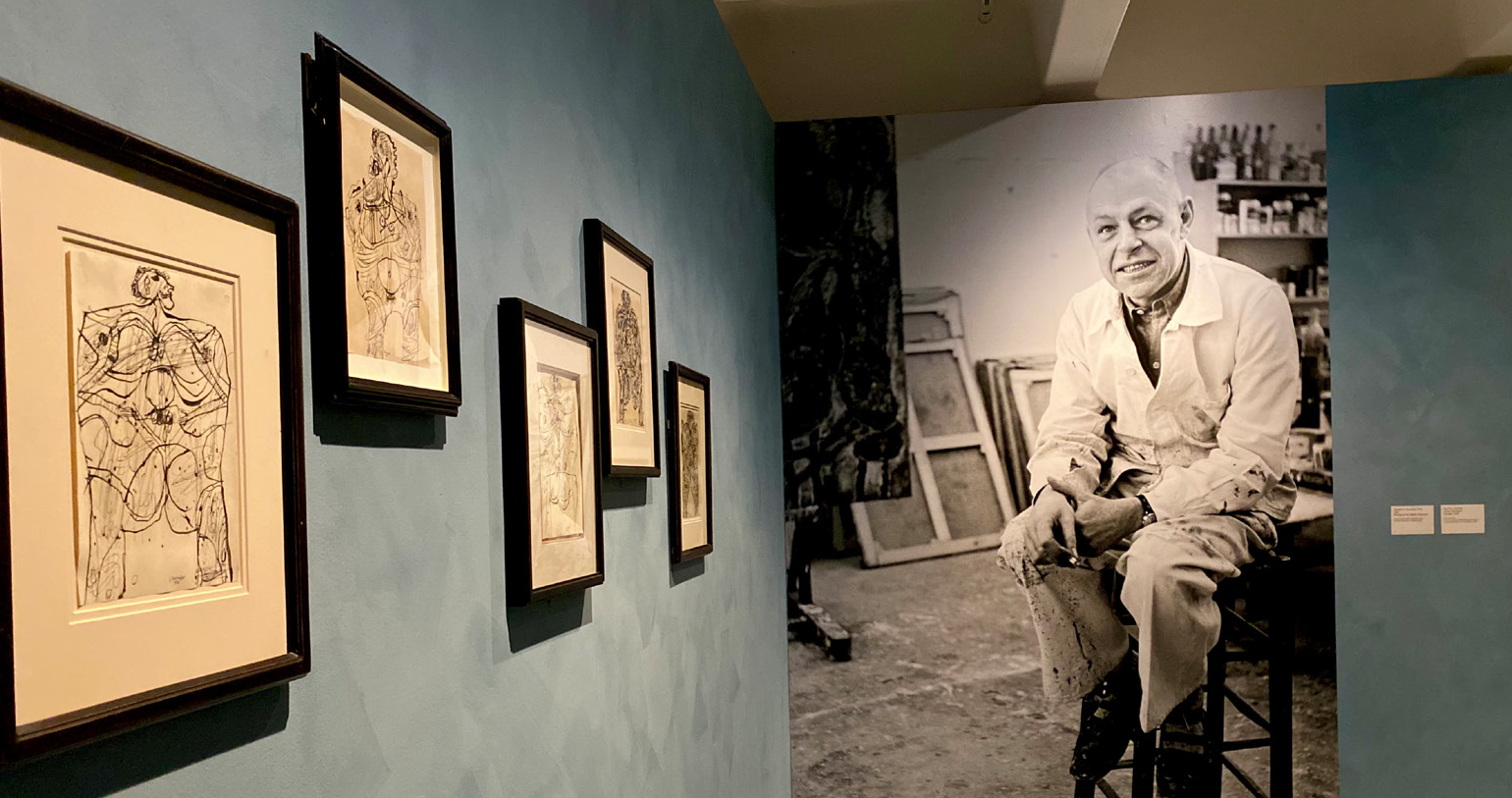 IN LONDON, AN IN-DEPTH SURVEY OF JEAN DUBUFFET’S ART AND IDEAS

Rarely have the circumstances in which we’ve been living felt so otherworldly.

Against the backdrop of worldwide upheaval caused by the coronavirus pandemic, the arrival of this exhibition focusing on the ideas and work of the French modern artist Jean Dubuffet (1901-1985) seems in perfect synchronicity with the anxieties and uncertainties of the current moment — and with our collective need to revitalize and recalibrate various aspects of our emptied-out, locked-out or shut-in lives. If this is a time for fresh thinking, then Dubuffet’s art and ideas provide some stimulating starting points for such an effort.

To encounter Dubuffet’s art in person or to read his statements about art, culture, and society is to feel his creative life force in a vivid way. It’s one that proposes a turbulent returning of one’s worldview according to this highly original artist’s own invigorating vision and philosophy. Dubuffet awakens us to an unconventional, alternative outlook on creativity, one that offers liberation from familiar aesthetic, cultural, and social constraints in every way imaginable.

Dubuffet once declared, “Art should always make you laugh a little and fear a little — anything but bore.”

Now, London’s Barbican Centre is presenting Jean Dubuffet: Brutal Beauty, the first comprehensive, career-spanning exhibition of Dubuffet’s work in the United Kingdom in over 50 years. It features more than 150 paintings, lithographs, sculptures, butterfly assemblages, and other creations, as well as a selection of definitive art brut works from the artist’s personal collection, including paintings, drawings, and objects by such artists as Adolf Wölfli, Aloïse Corbaz, Madge Gill, Fleury-Joseph Crépin, and Laure Pigeon.

Some basic background information about Dubuffet: He was born and brought up in an affluent family in Le Havre, on France’s Atlantic coast; his family was in the wholesale wine-selling business. In 1918, he began studying at the Académie Julian, a prestigious art school in Paris, but he left after several months, dissatisfied with the character and constraints of traditional, academic art instruction.

He went on to develop interests in ancient languages, poetry, avant-garde music incorporating ordinary sound, philosophy, literature, and ethnography. He established a wine business of his own in Paris and went in and out of periods of active art-making, but by the early 1940s, he was fully committed to his work as an artist. He made paintings of everyday subjects, including passengers on the Paris Métro, and he tended to pack his subjects into his pictures’ pictorial space in ways that recalled being confined in actual physical spaces.

His compositions, with their thickly impastoed surfaces — Dubuffet liked to mix sand, coal dust, string, or other materials into his paint — felt dynamic and strange. Dubuffet was inspired by graffiti, children’s art, and the making of marks by incising into surfaces covered with paste-like goop rather than applying paint onto them in the familiar manner.

Dubuffet liked to work in series. Over the years, he produced groups of technically or thematically related works, such as his “mental landscapes,” his “Texturology” paintings, and the numerous drawings, paintings, and sculptures, based on simple doodles, that became his “L’Hourloupe” series, with their web-like, thick, black-outlined forms highlighted with bight red and blue.

Of course, Dubuffet is also well known for his pioneering research about and collecting of works by socially marginalized, self-taught art-makers whose creations he called “art brut” (“raw art”), coining a term in the mid-1940s that would later become known in English, with a notably broader meaning, as “outsider art.”

Now, at the Barbican, one can feel Dubuffet’s uncontainable spirit as he poured and scraped it into the surfaces of his canvases to create paintings that appear monumental and alive, his worldview blotting out the shine of refined, academic art.

In such portraits as “Monsieur d’Hôtel” (1947, oil and sand on canvas) and “Corps de dame jaspé” (“Marbleized Body of a Lady,” 1950, oil and sand on canvas), and in the many “Messages” he produced in the 1940s (mixed-media drawings with ink-scrawled words, on paper), viewers can clearly see how Dubuffet absorbed and relished the overlooked and the discarded, both in his materials and in human life. As the subject matter of his art, he embraced much of what mainstream society deemed unwanted, irrelevant, or poor — or simply that which it misunderstood.

Dubuffet cherished so-called low life and “low” art, as well as the energy of the vital working masses and the marks — physical, social, cultural — they made and left in the environment of the modern metropolis. He abhorred what he regarded as mainstream society’s unjust claim to artistic creativity for its own purposes, in support of its entrenched class hierarchies.

Brutal Beauty is neatly organized and installed. For all of Dubuffet’s well-known renegade stance and contrarianism, there is nothing chaotic about this presentation, in which, notably, a film showing the artist in his studio, commenting about his work and aesthetic ideas, offers the most vivid evocation of his personality and spirit.

“For me, insanity is super-sanity,” Dubuffet once stated, adding, “The normal is psychotic. ‘Normal’ means lack of imagination, lack of creativity.”

This exhibition is a kind of big, exuberant gift, offering pandemic-weary visitors an invigorating dose of Dubuffet’s particular kind of artistic, creativity-celebrating joy. It was worth waiting half a century for an opportunity to see such a powerful show.

From November 1 through November 3, 2018, in Chicago, Intuit: The Center for Intuitive and Outsider Art, held a symposium, “Chicago Calling: Art Against the Flow.” That event was presented in conjunction with the broader Art Design Chicago program.

During the symposium, Edward M. Gómez, brutjournal’s founder and editor in chief, presented a talk, “Revisiting Jean Dubuffet’s ‘Anticultural Positions,’” an event that took place at the current home of the Arts Club of Chicago, the institution at which Jean Dubuffet delivered his influential speech in December 1951.

Intuit video-recorded Gómez’s illustrated talk, which can be found here, on YouTube, where it may be viewed free of charge:
https://www.youtube.com/watch?v=9tcEwyqdXnw