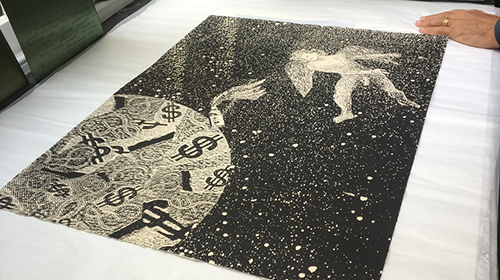 The British artist Jamie Reid is best known for the graphics he created for the Sex Pistols, providing the punk movement with an indelible visual language to complement its hard-hitting, subversive messages. Recently, he produced a limited-edition box containing a number of his designs in the form of high-quality etchings. Photo courtesy of John Marchant Gallery, Brighton, England
JAMIE REID: SUBVERSION IN A FINE-ART BOX

Even Mrs. Windsor must feel a frisson of excitement upon hearing the news that Jamie Reid, the British artist who years ago created the subversive graphics for the Sex Pistols’ records and publicity materials, forever giving the punk movement a distinctive, indelible look and visual language, has produced a limited-edition, fine-art box containing exquisitely crafted, high-quality etchings based on some of his signature, collage designs.

“God save the queen / She ain’t no human being,” Johnny Rotten, the Pistols’ front man, sang — or barked — in “God Save the Queen,” one of the band’s most controversial songs, which was released as a single — and promptly banned from radio airwaves in Britain — during Queen Elizabeth II’s Silver Jubilee n 1977.

Reid designed the 45 r.p.m. single’s sleeve, which featured an image of the British monarch printed in silver ink on dark-blue paper. In this elegant composition, her eyes and mouth were obscured by banners proclaiming the song’s title and the band’s name, each one rendered in the style of a movie kidnapper’s ransom note, with letters and words cut-and-pasted from newspapers or magazines. As a work of protest art, graphic design, or what used to be called “commercial art,” Reid’s emblematic design still feels as fresh and transgressive today as it did when it first appeared more than four decades ago.

For many years, the art dealer John Marchant, who is based in Brighton, a seaside-resort city south of London, has represented Reid in the contemporary-art market. Recently, Marchant and Reid presented “Rogue Materials,” a new, fine-art box, produced in a limited edition of 50 units, containing ten high-quality etchings Reid produced based on his original, photocopy-collage compositions. (During the heyday of punk, the Xerox machine became the powerful production tool of choice for artist-provocateurs like Reid.)

The release of this fine-art box coincides with the publication of the new book Jamie Reid Rogue Materials, 1972-2021, which was co-authored by Marchant and Steven Lowe, and has been issued in the United Kingdom by the L-13 Light Industrial Workshop in association with John Marchant Gallery. As the book’s title suggests, it offers an retrospective look at the diverse art and design projects Reid has realized over the past several decades.

It goes on to remind a reader that Reid’s earliest creations, during the 1970s, included drawings, stickers, posters, banners, and assorted independent publications, and that, in his work, he has addressed such political or social-justice issues as the Thatcher era’s poll tax, Britain’s Criminal Justice Bill, and Clause 28, an old law that criminalized homosexuality. In recent years, Reid has produced work for or related to the Russian, political-activist band Pussy Riot and the Occupy London and Extinction Rebellion movements.

About Reid’s limited-edition box of etchings and the related, new Rogue Materials book, Marchant told brutjournal: “The box includes ten etchings, all of which were produced using the photopolymer plate process. There are four black, two green, two blue, and two red prints, echoing the number of ink cartridges that were found in earlier office photocopiers, one of which, a Ricoh, was provided for Jamie when he started work at Assorted iMages in London in the mid-1980s. Much of the work in the book Rogue Materials springs from the freedom he had to hammer that machine as much as he liked, using single-color passes as well as multiple passes, and often shifting the placement of the original work on the machine’s scanner bed in order to achieve slightly disconcerting but fascinating misalignments. Then Jamie would often recollage the results, sometimes heightening the color saturation with felt-tip additions.”

We were intrigued by the dramatic contrast between Reid’s well-known technical experiments and his DIY aesthetic, and the high-quality, fine-art character that is usually associated with etchings or lithographs.

Marchant observed, referring to both the Rogue Materials book and the similarly named, limited-edition art box: “The project as a whole stems from my pleasure in all the extraneous copies, which are often rough as well as unique, to be found in the Jamie Reid Archive. I love these bits of paper, many of which Jamie has retained for decades. Some are finished works in their own right, while many are seemingly random copies, often displaying harsh exposures. All of them, however, have their visual qualities. The general idea for the limited-edition art-box set of etchings was to enjoy the contradiction between making something so exquisite and precious out of something so seemingly ephemeral as Xerox copies.”

As it turned out, it took Reid, Marchant, and their collaborators, including an experienced, master printmaker, longer than expected to produce the box of etchings. They used French-made Arches Aquarelle paper, and Reid signed each finished etching and stamped each one with his personal seal. Reid chose the art box’s amethyst-purple color. Veteran graphic designers will appreciate that the gold lettering on the lid of the box holding the etchings was made using old, cracked Letraset rub-on lettering.

The imagery or subject matter of the etchings in the “Rogue Materials” suite relates to various earlier works of Reid’s; for example, Marchant pointed out, “The ‘Sex Pistols, Fuck Forever’ piece comes from a rough photocopy of a photocopy of a photocopy of a collage Jamie used in [the 1980 movie] The Great Rock ’n’ Roll Swindle. Here, his ‘Heartbreak Hotel’ comes from a collage made during a campaign against a particularly vile, anti-LGBTQ parliamentary campaign by Thatcher’s government back in 1988. Interestingly, and typically for Jamie, the original collage features a copy of a painting done in the late 1960s, when he was a student at the Croydon College of Art [now Croydon College], alongside Malcolm McLaren [the founder/creator of the Sex Pistols], with whom he later worked with the Sex Pistols.”

We asked Marchant about “Silbury Hill,” another etching in the limited-edition box. He said, “That one is particularly special to me. It refers to a bump in the landscape that is actually a Neolithic construction, one of the largest in Europe; it is part of the Stonehenge/Avebury complex. We have a number of variations of this piece in the Jamie Reid Archive showing Jamie’s creative flow as he cranked the photocopier into overdrive.”

For collectors interested in Reid’s work, which is now included in the collections of such institutions as the Museum of Modern Art, in New York, depending on their size and age, prices for what Marchant refers to as the artist’s “prime collages” have ranged from £20,000 (about $26,600) to £120,000 (approximately $160,600). Marchant noted that Reid’s “prime collages almost never come up at auction,” where it is more common for the artist’s prints and posters to emerge. Nowadays, prices for such pieces sold at auction can range from £750 (roughly $1000) to, say, £3000 (almost $4000).

Earlier this year, in an interview for the website of The Civic, a self-styled “progressive” arts center located in Barnsley, a city in north-central England, just north of Sheffield, Reid observed, “Over the course of the last 30 years, I have done all sorts of lectures and talks to young people. I know how they [referring to local and national governments] cut things like art, music, and drama out of the syllabus in schools and make schools, including primary schools, competitive and all about examinations. Education should be about caring for your planet and caring for your fellow human beings.”

Reid’s engagement as an artist-activist in some of the most urgent issues of his times remains the starting point of much of his art. The contrast or edgy discrepancy between the supposedly crude methods of his art-making — in fact, the techniques he has developed are both clever and sophisticated — and the fine-art sheen of his new “Rogue Materials” etchings suite certainly imbues this new work with an appealing current of tension and with its transgressive allure.

If Mrs. Windsor has not already ordered her set of the new prints, she should do so soon. “Rogue Materials” has been issued in a limited edition, after all, and in-the-know collectors are scooping up its 50 units. Note to the palace staff: FedEx and the Royal Mail will deliver — right to your door.

Website page from which the new book Jamie Reid Rogue Materials, 1972-2021 may be purchased:
https://www.raggedkingdom.com/artand/rogue-materials-by-jamie-reid-1972-2021-xeroxs-cut-ups-and-outtakes