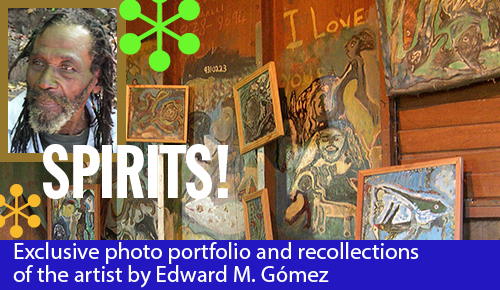 Leonard Daley (born circa 1930 in the parish of St. Catherine, Jamaica; died in 2006) was a painter who became known as one of the “Jamaican Intuitives,” a group of self-taught artists whose depictions of nature, people, and events in their local communities, as well as their conceptions of the cosmos, were often informed by both indigenous and ancestral African folklore and by animistic and spiritual beliefs. Collectively, their artistic creations contributed significantly in the decades following their island homeland’s independence from Britain, in 1962, to the shaping of a visible sense of Jamaican national cultural identity.

Daley and a group of his generational, autodidact peers became known as the “Jamaican Intuitives” after The Intuitive Eye, the title of an exhibition of their works that was organized by the late David Boxer and presented at the National Gallery of Jamaica in 1979. Boxer, who died in 2017, was a Wunderkind art historian and working artist himself who had studied art history in the United States.