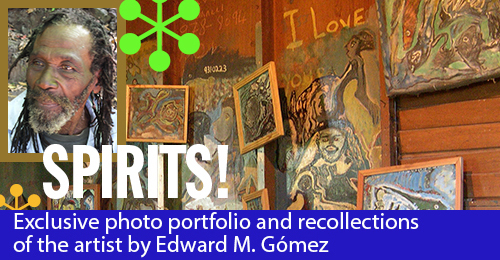 Leonard Daley (born circa 1930 in the parish of St. Catherine, Jamaica; died in 2006) was a painter who became known as one of the “Jamaican Intuitives,” a group of self-taught artists whose depictions of nature, people, and events in their local communities, as well as their conceptions of the cosmos, were often informed by both indigenous and ancestral African folklore and by animistic and spiritual beliefs. Collectively, their artistic creations contributed significantly in the decades following their island homeland’s independence from Britain, in 1962, to the shaping of a visible sense of Jamaican national cultural identity.

Daley and a group of his generational, autodidact peers became known as the “Jamaican Intuitives” after The Intuitive Eye, the title of an exhibition of their works that was organized by the late David Boxer and presented at the National Gallery of Jamaica in 1979. Boxer, who died in 2017, was a Wunderkind art historian and working artist himself who had studied art history in the United States.

He became the director of the still-new NGJ, Jamaica’s national art museum, at a young age, setting high professional standards for scholarly research, exhibition-making, and educational programs for an institution that, throughout its history, has struggled to fulfill its ambitious mission in the face of perennially inadequate funding and limited resources.

As a young man, Leonard Daley moved to Kingston, Jamaica’s capital, on the southern side of the island, where he worked as a taxi driver and a cook. He began making paintings when he was in his thirties, but by the late 1970s, when Jamaica’s small arts community first became of aware of his art, it appeared that none of his early works had survived.

Having learned about Daley’s paintings from Brazil’s ambassador to Jamaica in 1979 during the run of The Intuitive Eye, Boxer included them in that exhibition’s 1987 sequel, Fifteen Intuitives.

About his discovery of Daley’s art, the Brazilian diplomat referred to Hector Hyppolite (1894-1948), a painter whose works have become emblematic of the art of his native Haiti, and told Boxer, enthusiastically: “I have found the Jamaican Hyppolite!”

Boxer then raced over to Daley’s home in central Kingston and later wrote of his first encounter with the artist’s distinctive paintings: “In a darkened garage […] I entered a room that overwhelmed me with its intensity. My unease at the unabated angst that screamed from the walls was tempered by the extraordinary inventiveness of […] depictions of […] various animal and human forms, and […] distorted, tortured heads.”

Instead of a homegrown Hyppolite, Boxer had stumbled upon a contemporary Jamaican Hieronymus Bosch.

Little is known about the details of Daley’s life story, except that he somehow scraped by and created his paintings with plain house paint or oil paint on scraps of canvas or found pieces of board. Partly abstract, partly surreal, and partly realistic (in its depiction of birds, snakes, or plants), his pictures exude a deeply psychic-spiritual air.

In them, viewers find a rich stew of allusions to the power of natural forces, humankind’s relationship to the animal world, primeval spirits, and the irrepressible fecundity of the earth. Daley’s semi-abstract images evoke a sense of universal or cosmic consciousness — a kind of Jungian, primordial, collective memory.

At some point, Daley settled into a small house in the hills on the outskirts of Kingston. There, surrounded by trees and the lushness of “the bush,” he painted the exterior walls and sections of the interior walls of his modest, hut-like dwelling. He displayed his pictures in dense groupings inside his one-room house.

Speaking about his thought process and the making of his semi-abstract paintings, in which plants, animals, and phantom-like creatures all seem to cavort and swirl in dynamic, churning compositions, Daley once told a National Gallery of Jamaica researcher: “I close my eyes and I pray a lot. Sometimes tears fall down […]. Sometimes I sit down and look at the plain wall, and I can’t penetrate it. And so I will use some water in my mouth and spew it on the wall, and whatever way it dries, it comes out as a picture.”

In the 1980s, I began my professional career as a cultural-affairs officer in the U.S. Foreign Service. While working at the U.S. Embassy in Kingston, I got to know David Boxer and the pioneering research and curatorial work he was doing with regard to the art of the Jamaican Intuitives. During my working stay in Jamaica and in later years, during subsequent, regular trips back to the island, I met, interviewed, and photographed many of the Jamaican Intuitives, most of whom are now deceased.

In 2006, I visited Leonard Daley at his home in the hills overlooking Kingston, where we conducted an interview and did an impromptu photo session. I was the last journalist or art researcher to spend time with and photograph the artist before he died.

Most of the photos you see here have never been published before. They capture Daley’s strong but humble spirit, and the sense of living with — and for — his art that characterized his mode of being in the world. Artists like Daley are the real deal; they do not play at being artists, nor do they make art because they want to. Instead, they produce their strange, deeply personal and compelling artistic creations because they have to do so. For them, producing their art is as vital, as essential a part of their lives as breathing air.

For me, an artist like Daley was a true visionary, and the hard-to-define, hard-to-classify artistic legacy he left us continues to serve as a gateway to regions of the human spirit and to a broader, unfathomable universal consciousness with which no doctrinaire religious scriptures or scientific analyses can begin to compete.

As I see it, there is a line to be drawn between Daley’s mysterious paintings and the fascinating photos of the deepest recesses of the cosmos that only recently have been released by NASA — the first dazzling images sent back to Earth by the immensely powerful James Webb Space Telescope.

Daley’s art transports us to a vast, unknowable, distant cosmos — one that can be found expressed in the most common specimens of nature all around us every day, and in our minds, and, most certainly, somewhere deep in our collective soul.