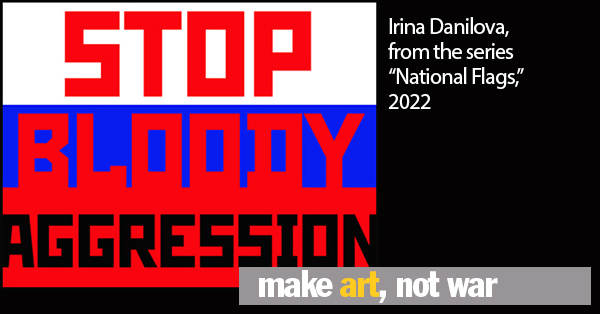 IN AN ONLINE EVENT ON JULY 20, SHE’LL PRESENT A SELECTION OF ANTI-WAR ART

For the Ukrainian-born artist Irina Danilova, who comes from the city of Kharkiv in the northeastern part of her homeland, close to the border with Russia, responding through art to that larger country’s current assault on the place where she spent the first 24 years of her life was a reaction that came naturally — and forcefully.

For the past three decades, Danilova has lived and worked in the United States, to which she immigrated after spending some time in Moscow; today she divides her time between Brooklyn, New York, and New Hope, Pennsylvania. Her art is conceptual and often project-oriented and performance-based; for many years, she has taught foundation-level art at Kingsborough Community College in Brooklyn.

On Wednesday, July 20, starting at 6:00 p.m., Eastern Daylight Time, in the LOFT section of Franklin Furnace Archive’s website, Danilova will present  “War in Ukraine & Art,” a live-streamed presentation of works of art produced by various artists in response to the current conflict in her native country. Danilova’s online event will be based on research she has been doing for some time, in which, as she explained, “I have analyzed different forms of anti-war art while questioning the possibilities of creating artwork during a time of war, death, and bloody aggression.”

In notes describing the July 20 event, Danilova states, “Art and war are mutually exclusive concepts: creation and destruction, while the concept of destruction is not a stranger in modern art. War deteriorates life, becoming part of it. War stifles creativity, eliminates levity, and suppresses playfulness. The controversies in the art of the wartime transformation of artists and a war-related change of the perception of art [are] the subject[s] of this presentation.”

In addition to some of her own anti-war-themed projects, Danilova will share with her audience the creations of a range of different artists, including what she has referred to as “examples of the anti-war art in Russia” and works made by “prominent Ukrainian women artists” who are involved in performance art.

In the past, Danilova has produced many performance and installation works. Many of her art projects, which are summarized and described on her website, have been related to the randomly chosen number 59. In one such project, for example, which she has realized in various cities, 59 people are invited to take a local bus bearing the number 59, which drives along a local road whose number is 59. Of course, the vehicle moves at a speed of 59 miles or kilometers per hour.

Regarding the outcome of the war in Ukraine so far, roughly four-and-a-half months since it began, Danilova noted that, to date, “[approximately] 3000 buildings have been ruined or destroyed, including residential and historic buildings, schools, kindergartens, museums, and hospitals in my dear Kharkiv, which has become the second horror city after Mariupol [which the Russians brutally attacked earlier in the war]. Bombs are still exploding there as I write. The bombing has never stopped.”

Danilova added, “The only thing I can do as an artist is to cry out loud, which I have done in my series ‘National Flags.’”

Images of the symbolically powerful flags the artist has designed appear here.

She left us with a provocative, perhaps even unsettling observation. Musing about how people in different parts of Europe have been responding to news of the ongoing war in her native land, she pointed out, “Right now, I am focused on the war in Ukraine, whereas my Italian friends seem to be more angry about American imperialism than about the cold-blooded aggression of imperial totalitarianism. Quite a challenge, isn’t it?”

The artist Irina Danilova’s website can be found here.