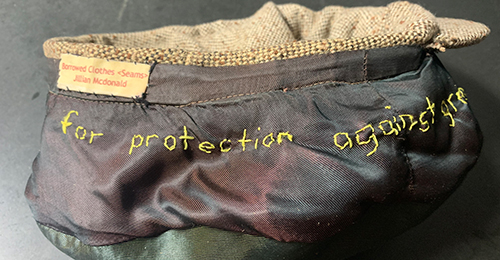 HATS OFF TO HARLEY’S HEADGEAR

AN ARTIST TRANSFORMS A WINTER HAT INTO A POWERFUL TALISMAN

In our blissful, hope-filled moment of tranquility, however much of a delicious fantasy it might be, inspired by our “Make art, not war” theme – we can dream of peace, can’t we? – our thoughts turn to those aspects of everyday life that may provide some measures of solace and nourish the soul.

So it is that we recently rummaged through Harley Spiller’s drawers and closet, and found a humble but remarkable item of headgear.

Spiller is the director of Franklin Furnace Archive, the online arts organization that, since the late 1990s, has served as one of the go-to, leading research sources in the world for information about and documentation of avant-garde art of roughly the past half-century. It is also an active grant-making institution, offering support to performance artists, conceptual artists, and other creators of new and experimental art projects, notably including those characterized by a sense of social engagement or that relate to issues that are percolating in contemporary culture and society.

Franklin Furnace Archive was founded in the mid-1970s by the artist and educator Martha Wilson, and for many years operated a physical space on Franklin Street, in downtown Manhattan’s TriBeCa district, where it presented exhibitions, performances, and other events. Over the years, it also built up a significant collection of limited-edition printed matter; films and video and audio recordings related to or documenting artists’ projects and performances; artists’ books; and ephemera associated with the contemporary avant-garde.

When Franklin Furnace Archive closed its physical space and became an Internet-based institution, its physical collection of art and related material became integrated into the permanent collection of the Museum of Modern Art in New York.

However, that august custodian of modernism’s most memorable tchotchkes cannot compete with the mountains of enthusiastically amassed stuff, all neatly organized and archived  — hundreds of scissors, restaurant menus, newsstand weights (for holding down stacks of newspapers), magnets, chicken wishbones, Mr. T. memorabilia — that Spiller has collected for many years. In the guise of “Inspector Collector,” he has shared his passion for collecting — the art, in fact, of gathering and connoisseurship — with youngsters by addressing school groups.

Spiller’s book Keep the Change: A Collector’s Tales of Lucky Pennies, Counterfeit C-Notes, and Other Curious Currency was published by Princeton Architectural Press in 2015.

It was among Spiller’s bounty that we found a hat.

This was not just another hat, but rather, like so many of this inveterate collector’s possessions, one with a back story, which goes like this:

Harley’s paternal grandfather was Ukrainian. Many years ago, Harley’s parents visited Russia, where they saw the locals wearing the kind of noggin-warming headgear that is pictured here. After making some inquiries, they found a merry milliner who could custom-produce one of these hats, which they brought back to the United States as a gift for their son.

Spiller fils spoke with brutjournal and recalled: “In 2002, the artist Jillian McDonald was doing a project called ‘Borrowed Clothes: Seams’ in a tiny storefront near the former World Trade Center. She invited members of the public to lend her an article of clothing and speak with her, and then come back a few weeks later to claim the items they had left with her, onto which, in the meantime, she had stitched hidden messages of protection. I brought her my Russian hat, into which she embroidered part of a statement she remembered from the conversation I had with her. It says, ‘For protection against greedy war enthusiasts and their actions.’”

Harley did not have to spell out how appropriate that kind of protection can feel at this current moment in world history.

Looking back to the future and referring to today’s Russian assault on Ukraine, he also noted, “Back in 2002, war in Russia was on my mind, as it always had been, which explains why I have never gone to visit my ancestral country. Maybe one could say that somehow I sensed that the situation would one day become what is has become today, because the atmosphere has always been warlike in Russia, and what I know now has to do more precisely with my ancestral homeland, Ukraine.”

We say to Harley, “May the protective force of that hat be with you, even though it’s a bit of a thick rug to be sporting in the summer heat. But whatever. Protection is protection, and nowadays, you gotta take it when you can.”

Hats off to the artist Jillian McDonald, too, for the power of her stitches.