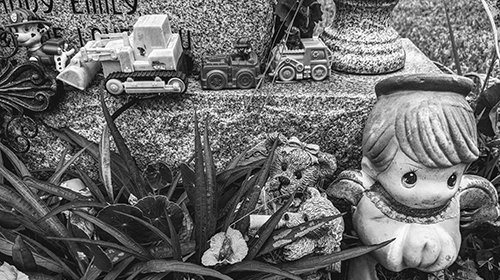 David Ensminger is an instructor of English, the humanities, and folklore at Lee College in Baytown, Texas. His books include, among others, Visual Vitriol: The Street Art and Subcultures of the Punk and Hardcore Generation (University Press of Mississippi, 2011) and Mojo Hand: The Life and Music of Lightnin’ Hopkins (University of Texas Press, 2013).

Over the last few decades, I’ve visited numerous cemeteries all across the American landscape — solemn pastures of remembrance and loss, including the well-kept grounds of U.S. Civil War battlefields and adjacent fields filled with white crosses marking the places where bayonets, long rifles, and cannon fire brought death to horses and men; and pioneers’ dust-caked, final resting plots in the American West that, over time, have become disheveled by earthquakes and now bear silent witness to history in the shadows of ever-encroaching suburbs. In New Orleans, I’ve seen moss-covered stone crypts lying among the magnolias and absorbing the whirring sounds of passing trolley cars.

In a search for understanding of my own ancestral roots, I visited the burial place of my grandparents on Chicago’s north side, where, today, a pond glimmers near the graves of Nobel Prize winners, American vice presidents, and local mayors as deer and geese drift by their tombstones. I’ve touched the graves of my Mueller family great-great-grandparents, who lie for eternity in a fecund rural stretch of central Wisconsin, not far from their homestead, which was once farmed by the Amish.