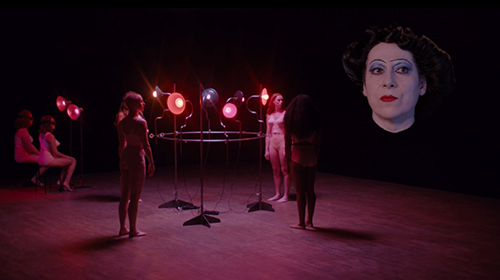 A MAKER OF SOUND, VIDEO, AND PERFORMANCE WORKS WHIPS UP A RICH FANTASY FOR PANDEMIC TIMES

The British artist Georgina Starr is known for her video, sound, and performance works. Now, in Quarantaine, her new, short film, she blends strange imagery and powerful evocations of female, psychic-emotional energy in a dream-like tonic for these pandemic-weary times. In the United Kingdom, the film has been shortlisted for the 2021 Jarman Award, which is named after the English experimental-film director, stage designer, author, and gay-rights activist Derek Jarman, who died in 1994.

In French, the word "quarantaine" refers to a quantity of forty or roughly of something; it also means "quarantine" in the modern sense of a period of time in which an infected person must be isolated from others to prevent the spread of a harmful infection. That meaning derives from the use of the word centuries ago following Europe's experience with the bubonic plague (the "Black Death") and subsequent life-threatening outbreaks.