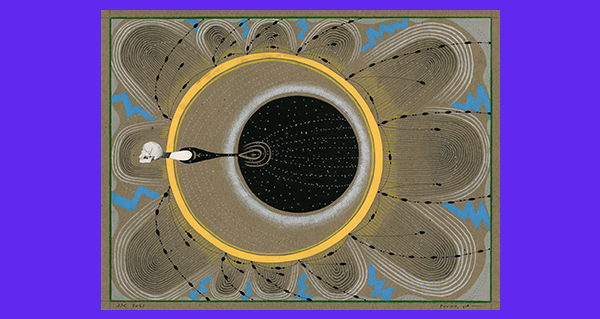 J.J. Cromer was trained as a librarian but later became an artist. Over the years, in his collage-making, he has cut up and made use of his own earlier artworks, and he is big on the role of chance in the production of his collages. Seen here: “The Sun as a Hoop (The Old Boy Stopped Playing),” 2021, mixed media on paper, 8.5 in. x 11 inches. Photo courtesy of the artist and Aarne Anton/Nexus Singularity
FOR J.J. CROMER, THE ART OF COLLAGE IS THE ART OF SURPRISE

There is something about the art of J.J. Cromer that is precise and skillfully rendered and, at the same time, seemingly conjured up out of the ether. His art may seem to point the way to something scientific or mystical but it never clearly reveals its subject matter or intentions.

That might be because its creator himself always embarks on the adventure of creating a new collage-based work fully embracing — and making plenty of room for — one of the most fundamental elements or forces that has long characterized the production of many forms of modern art, including the work of some abstract-expressionist artists and the creators of 1960s-era happenings and later performance-art events.