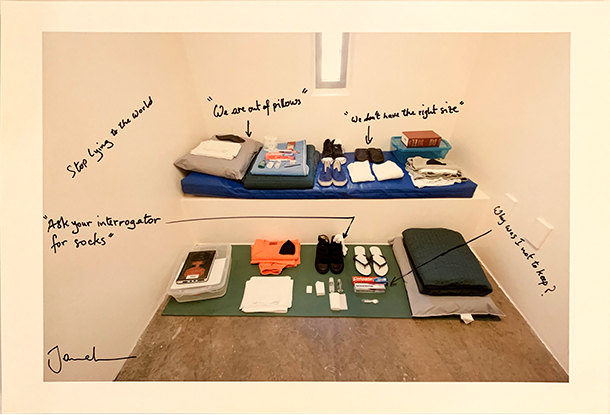 From the exhibition Remaking the Exceptional: Tea, Torture, and Reparations | Chicago to Guantánamo, which is on view through August 7, 2022, at the DePaul Art Museum in Chicago: Debi Cornwall and Djamel Ameziane, “Comfort Items, Camp 5 (Stop lying to the world),” 2015. Photo courtesy of the artists, via DePaul Art Museum
CHICAGO EXHIBITION: TORTURE, TEA, AND ART

IN CHICAGO, "REMAKING THE EXCEPTIONAL" EXAMINES THE RAMIFICATIONS OF TORTURE — AND ACTS OF RESISTANCE AGAINST IT

In the first episode of the podcast “Remaking the Exceptional,” the audio arm of the Tea Project, a Chicago-based art and advocacy program run by the artists Aaron Hughes and Amber Ginsburg, co-host Hughes, an Iraq War veteran, recounts a story his friend Chris told him. Chris, a United States military prison guard, was in charge of collecting contraband from prisoners’ cells at the extralegal detention center the U.S. government opened 20 years ago on the U.S. Navy base at Guantánamo Bay, Cuba. That installation was created during former President George W. Bush’s “Global War on Terror,” a campaign his administration initiated following the terrorist attacks that took place on U.S. soil on September 11, 2001.

At the Guantánamo jail, every night after dinner, each inmate was given a small, Styrofoam cup of tea. Hughes remembers Chris telling him, “These flimsy Styrofoam cups would become [the prisoners’] precious canvases for expression; [they were] the only place[s] they could make a mark.”